The topic of sales numbers has become prevalent in gaming discourse. What used to be a worry reserved for shareholders has bled into fan circles as well. These enthusiasts look to numbers to see if their support has paid off. To prove to publishers that there's not only an audience for their games, but a desire for more.
Mega Man fans have been told, outright, that the sales of the original Mega Man Legacy Collection directly influenced Capcom's decision to greenlight Mega Man 11. That statement wasn't just heartening -- it was validating. Information like that isn’t always transparent, though.
Sometimes a game fails to hit a sales milestone and the company simply doesn’t report on it. That might be the case with Mega Man Zero/ZX Legacy Collection, for example. Information on how that title performed wasn't publicly released. But for situations just like that, we can look to fan-based data groups for help.
In recent years, fans took it upon themselves to create sales databases. And while some are infamously-inaccurate and unreliable like VGChartz, others strive for accuracy by gathering legitimate data from the networking services of the major gaming storefronts. Using this available data, I decided to conduct my own research to see how recent Mega Man games performed against Capcom's own data.
DISCLAIMER: The following is a speculative piece that includes data not verified by Capcom unless otherwise stated.

We’ll be looking at the most recently-available Mega Man titles from the 8th generation of consoles. They are Mega Man Legacy Collection, Mega Man Legacy Collection 2, Mega Man 11, Mega Man X Legacy Collection, Mega Man X Legacy Collection 2 and Mega Man Zero/ZX Legacy Collection. Oh, and Mighty No. 9, too.
The data for PS4 and Xbox comes from Gamstat.com (which has ceased updates as Nov. 2020 due to the onset of 9th generation hardware). It's important to note that Gamestat data is player-based which doesn't necessarily correlate with sales. But we're still taking that into account for research.
Data from PC/Steam has been taken from PlayTracker.net. SteamSpy used to be the dominant database site for Steam games, but after the change on Valve’s default privacy policy, data has become a lot more inaccurate (and simply outdated in some cases). They also claim to track data from PSN and Xbox but it's locked behind a paywall. I wasn’t able to verify that data at this time.

The Nintendo data is complete speculation based on very basic mathematics: the sum of all the versions’ data minus the official sales number from Capcom.

I’m not deliberate being biased here, but it’s easy to assume that -- based on the trends you're about to see -- the Switch versions will be the dominant platform for these games. This goes hand-in-hand with the strong association between the brand and Nintendo from general consumers. In the same way, it's is safe to assume the Xbox version is the lowest-selling.

Without further ado, these are the results: 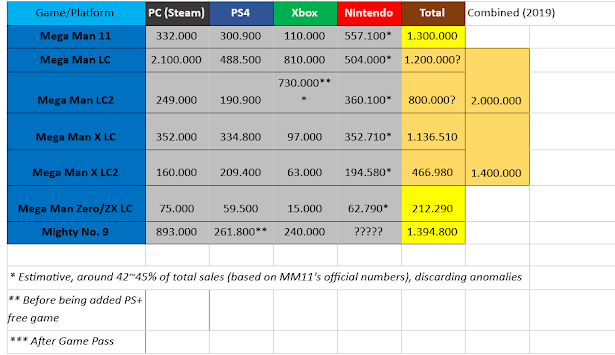 First off, I will point at Mega Man 11 and the Zero/ZX Legacy Collection as the most “safe” stipulations. There's nothing inherently contradictory with official data.

Now, the first issue we can see is that Mega Man Legacy Collection on Steam already surpassed Capcom’s own, official data as recent as Dec. 2020, which could suggest that they aren’t taking Steam into account. But even if they did, the numbers still wouldn’t line up as the PS4 and Xbox numbers, alone, match the total sales with no room for the Switch version (or 3DS, for that matter).  It's also entirely possible that Capcom stop keeping track after a certain point in a title's lifespan. Once it's become a "back-catalogue title", perhaps.

Mega Man Legacy Collection 2’s numbers haven’t been reported explicitly. However, in 2019, it was stated by series producer Kazu Tsuchiya that MMLC1 and MMLC2  sold 2 million units combined. We can assume, therefore, that MMLC2 sits at around 800k. This, too, is barring the spike caused by MMLC2 addition to Xbox Game Pass.

Mega Man X Legacy Collection 1+ 2 were reported to have sold 1.4 million units combined... BUT this data is from 2019, so we can expect some growth from it. However, while the pattern suggests that X Legacy Collection 1 sold the most of the two, it’s not ranked on Capcom’s Platinum titles. Despite my calculations, it's very possible that XLC1 hasn’t *quite* hit that 1 million mark on it's own just yet. It may  be sitting at 900k, give or take. 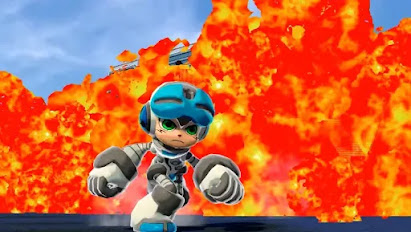 "Why is Mighty No. 9 on the chart?”, you ask? Because it provides a bit of perspective that sales numbers aren’t always the end-all, be-all that they're often made out to be. For Mega Man Zero/ZX Legacy Collection, this is important.

Mighty No. 9's notorious bargain-bin status has it going on sale for as low as 80% on Steam. In fact, if you add the people who played for free when it became part of PS+, that number goes as high as 1.3 million units. It's sold about as well as Mega Man 11... yet Mega Man 11 is considered the success story. Why?

Look at it this way. No one from Deep Silver or Comcept (Level-5 Comcept?) celebrated ANY milestones or immediately announced a Mighty No. 9 sequel. The game may have sold a lot of units, but that doesn't mean it was profitable. When you take into consideration how much money had to be spent onmultiple versions (two of which failed to materialize), multiple SKUs, marketing campaigns and even other ill-fated projects, it's no wonder why the Mighty No. 9 brand -- at the time of this writing -- is effectively dead.

That's the difference, folks. Profitability. When games are green-lit and move into production, they're given a budget based on project sales. Projected sales are expectations set by the performance of past titles and a summation of general brand interest (revenue accumulated from goods and merchandise, for example). Mega Man 11 and the many Legacy Collections succeeded because they're in-line with the realistic, reasonable expectations Capcom laid out pre-production. And they were profitable.

Zero/ZX Legacy Collection may have sold far less than its counterparts, yes, but that doesn't outright spell doom and gloom...

You have to remember, the individual titles in both the Zero and (especially) the ZX series never moved more than 200,000 units on their own. Zero and ZX have always been pretty niche, due in large part to the perception that they're "very hard" games. When putting this collection together, Capcom had to consider that. There was simply no way ZZXLC would have the same kind of reach and impact as MMLC1+2 or XLC1+2. So while ZZXLC's numbers may look disappointing to us, there's a very good chance that it was profitable. And that's enough.

Make no mistake: the picture being painted here is good. Very good. It's blazed a path ahead for, what could be, an ambitious future for the franchise.

While we cannot directly link you or go into great detail at this time, the Capcom breach in November did cue us in on the next "major" Mega Man game set for 2022. We're going to refer to it as "対戦" or "Taisen" here. Again, can't get into specifics, but because of how well recent Mega Man games sold, "Taisen" not only has a larger-than-usual budget for a Mega Man game (it's reportedly the size of Monster Hunter Stories 2), but a projected sales target well above even the best selling Mega Man game in the franchise's 30-year-plus history: Mega Man 2.

This isn't speculation or exaggeration. It's all all there in the breach.

Whatever "Taisen" turns out to be, it is an unquestionable testament to how well the brand has recovered in the last five years. If this were 2010, there would be no way a Mega Man game with that kind of "Zenny" behind it would get the green light.

Yes; we're in a drought at the moment. But you know what? It's all good. For the first time in a long time, we can breathe easy knowing that this quiet period wasn't brought on by poor sale figures or key staffers leaving the company. This time is being spent developing something different. Something that's taking a lot of time and, well, a lotta Zenny.

We're in the waiting game again, yeah. But it's different. There's no uncertainty this time. There's assurance that things are fine - the franchise is in good health - and something cool or maybe a little weird awaits us in the new year.

Mega Man is here to stay.

Posted by Protodude at 2:18 PM