The Making of the Rockman ZX Series Part 4: Character Design

After a small delay, we are back with a complete translation for the fourth part in Makoto Yabe's "Making of ZX Series" interview conducted by Rockman Unity. This time Ucchy and Makoto Yabe discus the origins and design philosophy behind the most notable characters in the first game.

Part 5 was scheduled to be published on March 25th; however, the original blog post was edited and the date was changed to a mere "coming soon". As soon as part 5 is online, we will bring you a translation with help once again provided by our friend Sidier.  Without further ado, you can find part 4 after the break! 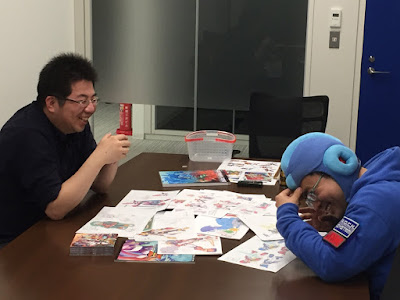 ▲It looks like fun, no? He told so much things, I had a lot of fun.

※There’s spoilers included so those who haven’t played, be careful!

Can you tell us about the “making of” each character?

This design went through a lot of trial and error.

When Aizu (Inti Creates CEO) asked me to incorporate “transformation” into the game, I imagined that, ultimately, he’d be a personification of “Rockman X”.

The “classic” Rockman often has his helmet off in some games, showing how he has a “normal body” at times, right?

Taking that as a model - and before I gave Vent the image of “a suffering young man” - if a younger, vigorous “X” existed at the same time as Rock (classic) did, what would he have been like? That was where the idea for the design came from.

As for his hair, I designed it so that it’s fluttered by the wind that comes head-on. His name is the French word for “wind”.

▲Vent’s design illustrations, and an initial illustration of the Model ZX’s from three angles. The “tights” that we talked about last time are incorporated in the designs.

On the other hand, Aile was done after I finished Vent so her design was easier to do.

Aizu-san asked me to make a girl character so that girls who played the game could play as her.

As for Aile's hair, I imagined it would flutter when wind came from behind, the opposite from Vent (laughs). Her name means “wings” in French. 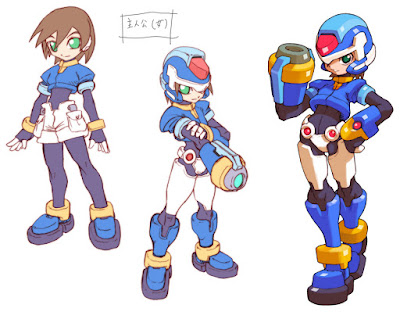 He’s the character who carries the baton, the power of “Zero”, so to speak. He passes the "power" down to the protagonists. He is also the one who becomes “Model Z”.

I designed Girouette's outward appearance that expressed “the person inside of Zero” - i.e those who provided his voice in the past. As for his personality, I went for the complete opposite of Zero - Girouette became a “gentle and kind senior”; I reflected all of those elements on his design.

Girouette carried the key to make the protagonists, a normal boy and a girl, fatefully meet the Bio Metals. He’s the CEO of the delivery company “Girouette Express” which does illegal jobs... that was the role I assigned to him.

In terms of settings, his company is a subsidiary of the Guardians. Although players only see three people working for him in the game, there's more members. In theory, that is.

His name is based on the French word for “weather vane” and it also means that he guides both Vent and Aile. 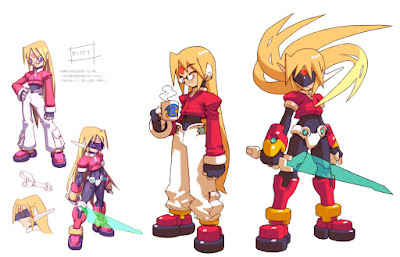 ▲While he's a different from Zero, Girouette still feels like he is Zero himself.

When compared to the previous series, the Zero series, we had young men like Copy X and Elpizo and an old man, Dr. Weil, as villains. This time around, we needed a boss character that was different from them; that is the origin of Serpent.

As an “adult character”, he doesn’t indulge in sound arguments; instead, he insists on the social justice that “the world must change, no matter the price”. He uses his authority to fulfill his ambitions; a “mister” character*.

*note: “mister” is often used to refer to middle-aged men when seen from a child’s point of view.

Serpent design was originally more slender, but as I kept updating the design, the body gradually become more bulky.

The name “Serpent” comes from “snake”. It means that his huge corporation swallows up countries and other organizations.

▲Normal Serpent, and 1st and 2nd forms. The “frightful adult” who holds authority is represented in a strong way.

They are the characters whose designs I struggled with most. They’re in a position similar to the 4 Heavenly Kings of the “Zero” series.

Since we already designed the four Bio Metals (H, F, L, P) I couldn’t use elements or colors from them. That was the starting line.

After a lot of trial and error, I used the “grim reaper” and a “witch” as motifs.

Their names are based on Greek myths, but I named them after Saturn’s moons and investigated the myths behind each one. This concept is also used for the “Rockman ZX Advent” boss characters.

I see! I was wondering if Pandora was named like that because Elpizo ("hope") was the last thing to come out of "Pandora's Box" 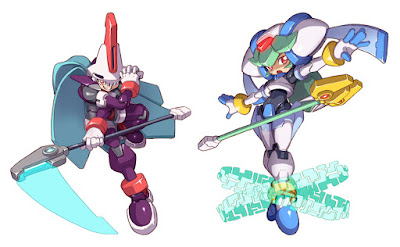 ▲Illustrations of Prometheus and Pandora. At first they were named "Abigor" and "Uphir".

After a lot of back and forth, I ended up with the current design.

The tight uniform shows her “stoic leader and commander” side but, internally, she still has her “girl” side.

As for Prairie's room, the background staff ran out of control. But I think that, ultimately, her room delved further into the duality of her character, that of "commander" and "girl". 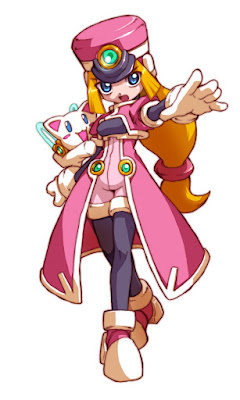 ▲Prairie still carries her original Zero series "atmosphere" but she was designed more as a “stoic commander”.

That's all for now! Don't forget to read up on the previous translations: