To celebrate the release of Rockman Zero & ZX Double Hero Collection in Japan, Inti Creates president Takuya Aizu took to Twitter to share a little surprise. Out of nowhere, he released the first four pages of a 21-page "Setting Collection" document that was used as PR materials for Rockman Zero 1. This document was originally submitted to Capcom on February 15th, 2002 -- a little over 2 months before the game's release in Japan.

The tweet is still available at the time of this writing, so we can assume Capcom is okay with Aizu-san sharing the document publicly. Perhaps he will share the remaining 17 pages some day, too. But until then, you can read four available pages in English, translated by our own Sidier, after the break! 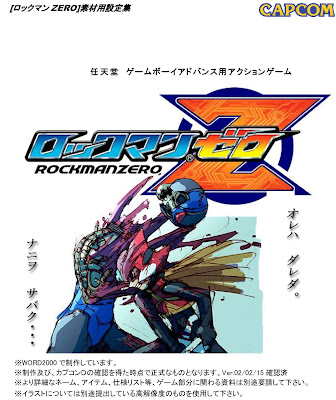 Rockman Zero Settings Collection to use as materials

※Made with Word 2000
※The development, which has earned the permission of Capcom-D, is official. Version 02/02/15 is already confirmed.
※For more detailed storyboards, items, lists and materials related to the game, request them separately.
※As for illustrations, please use those provided separately; they have a higher resolution. 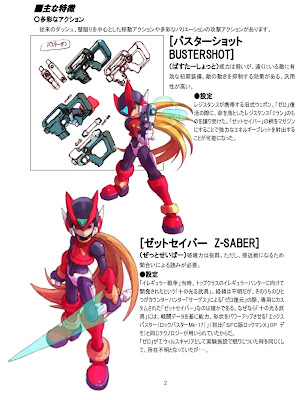 MAIN TRAITS
There are a variety of attack options with the classical dash and the wall-kick at its core.

It has low ATK but it’s an initial equipment item that’s useful against distant enemies. It has an effect of suppressing the enemy movements. It can be used in many ways.
An old type of weapon carried by Resistance members. It’s inherited from the Resistance member “Milan” who dies during the resurrection of “Zero”. By turning the grip of the “Z-Saber” into a magazine, it becomes capable of firing more powerful energy bullets.

It’s incredibly destructive. However it’s a close-quarters weapon so depending on the situation, you might have to evaluate how to use it.
At the time of the “Irregular Wars”, there were the “10 Shining Weapons” developed for top-class Irregular Hunters. The whole sequence of events is unknown, but one of them was custom-made by “Serges” of the Counter Hunters during the “restoration of Zero”, that much is certain.

The same tech of the “X-Buster (Rock-Buster Mk. 17)” [First appeared in the SNES introduction of Rockman X], which powers up its abilities and its shape (of the Buster itself) using battle data as a basis, is used for the “10 Shining Weapons”.

When “Zero” went into slumber at the lab, as the carrier of the Sigma Virus, the Z-Saber's whereabouts became unknown yet… 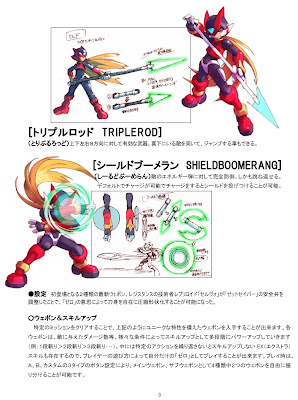 A weapon useful in 8 directions, including up, down, left and right. It can thrust into a foe below and can be used to jump as well.

It can completely protect the user from enemy bullets and bounce them back, too. It can be charged up by default, and by doing so you can fling it.
Two types of new weapons that make their debut in this game. The Resistance engineer “Cerveau” calibrates the safety valve of the “Z-Saber” and made it possible for “Zero” to compress the blade when he wants to.

By completing a certain mission, you can get weapons with unique traits as explained above. These weapons, by fulfillingconditions such as amount of damage inflicted to foes, will increase their skills and steadily power up.

(Example: 1 slash -> 2 slashes -> 3 slashes). Among them are EX( Extra) Skills that won’t increase unless you perform specific actions. Depending on the actions of the player, you can play as your own, unique “Zero”. There are 3 type of button combinations: A, B, and “Custom”; so you can freely assign two buttons (Main Weapon and Sub Weapon) from within the 4 buttons (of the console). 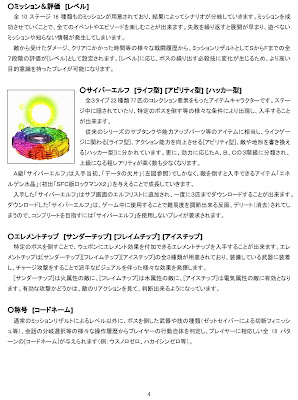 There’s a total of 10 stages and 16 types of missions and, depending on the results, the story will branch. By completing missions, you can enjoy all of the events and episodes. If you keep on failing, things will happen faster,and will result in missions you can’t play/information that won’t be given to the player.

Using the battle history (damage from enemies, time needed to complete the mission, and others) the results will be evaluated with a “Rank”. There’s 7 types of them ranging from S to F. Depending on the “Level”, the “sure-kills moves” that the bosses use will change and you’ll be able to enjoy a gameplay with a sense of purpose.

There 3 types, 22 species and 77 elves; they’re “item characters”, things to be collected. Some are hidden in the stages, and will appear if you meet certain conditions (such as defeating one or more specific bosses) thus allowing you to get them.

They’re the equivalent of SubTanks and power up parts from the previous series; the “Life Type” elves that are related to the “Life Gauge”, the “Ability Type” elves that improve the player’s actions, and the “Hacker Type” elves that can overwrite foes and terrain. They also are split in the A, B, C types depending on their effects. The higher the class, the rare they are and the less there’s of them.

When you first get a “A Class” Cyber Elf, they are but “Data Fragments” (see graph to the left), and they will grow by given the item that foes dropped upon defeated, “Energen Crystals” (First debut: SNES Rockman X2).

The Cyber Elves you get will be added to the Elf List sub-screen and you can download up to 3 of them at once. The downloaded “Cyber Elves” can be used in the game to lower the difficulty but, on the other hand, they are “deleted (erased)”. If you want to fully complete the game, you will need to play it without using any of them.

Apart from the results in normal missions, the history of your actions (weapon you used to defeat a boss, type of attack (finish it off by splitting in half with the Z-Saber), choices in conversations, the player’s actions are evaluated and the player is giving a codename fitting them out of 18 types. (Examples: Half-Wit Zero, Destroyer God Zero).