We are back with the third part of Makoto Yabe's interview about the creation of the ZX series, translated by our good friend Sidier. If you missed the first two parts you can check them here. We'll have a translation of part four next week when it becomes available !

In the meantime, you can read part three after the break! 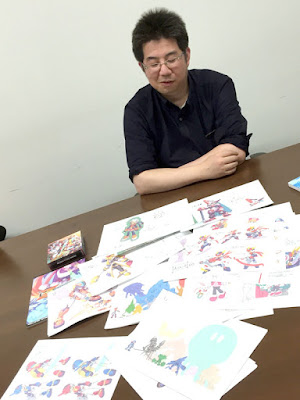 Today we’ll talk about how the “ZX” protagonists were made!

There’s spoilers included so those who haven’t played, be careful!

You were in charge of the Character Design and Scenario of “ZX”; it must’ve been a huge workload, am I right?

Truly… it was such a hardship (laughs).

When I worked on both scenario and backgrounds in the “Zero” games, I wrote the scenario and once the main outline was done, I’d get to work on the backgrounds. That was the flow. But since I had to do character design for “ZX”, I had to do both tasks simultaneously.

And when all of that was done, I had to make the illustrations for publicity materials.

Whoa! That sure was a HUGE workload! 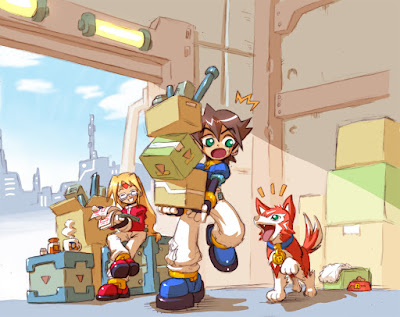 ▲He did character designs and day-to-day sceneries, too. The world of “ZX” was built after a lot of struggle.

I barely remember anything from the 2-3 years I spent making both games (laughs). It’s like I was swallowed by a stormy ocean… and when I became conscious, they were finished (laughs).

(Laughs) That… must’ve been hard. How did you manage your schedule?

I drew lines to mark the progress of work in the schedule, but since there were several parallel schedules, it actually felt like marking my deadlines.

(Laughs) So it was more like “I’ll end it before this date”.

Yes, or else I’d be making stuff forever! (laughs) 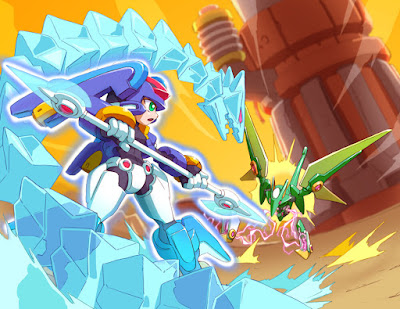 ▲Image illustration of a boss battle. He also worked on the boss designs.

The idea was to inherit the world of “Rockman Zero”; how much work and calibration was done when balancing the settings that you’d continue from the previous game?

At first there was an idea of “Recreate 'Zero' and 'X' in the present (the future) through the 'power of science', and from there we went with the idea of 'inheriting the power of the real Zero'. 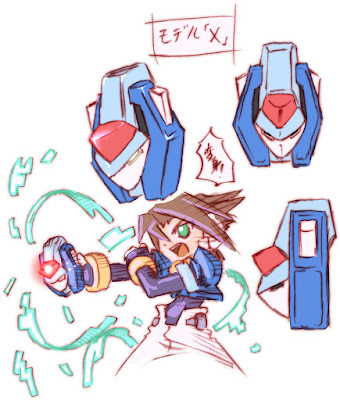 ▲ The setting image of the Live Metal. As the key item of a “Transformation Hero”, the data of “X” is woven into it.

I think that the idea for Model “ZX” - based on transforming into “Model X” - which had figuratively had the power of the Rockman X series, and overwriting it with “Model Z” - which had the power of Rockman Zero series - was by Inti Creates CEO Aizu-san. At first there were many ideas for the the game's name, too, such as “XyZ” or “ZASH” because it lead into the world of “Rockman DASH”.

I see! So how did the design process go?

I first designed "Model ZX” which combined the powers of “X” and “Zero”; and from there I began subtracting parts from it to design the “Model X” and “Model Z”, respectively.

▲ From left to right: Model ZX, Model X, Model Z. Now that I know they were based on “ZX”, it makes more sense!


Oh, I see! So that’s why there are parts that both “Model X” and “Model ZX” have in common!

▲ These are the in-game icons of Aile (Left: “Model X”, Right: “Model ZX”.). The temple and cheeks being close is because there was an idea of making an “overwriting transformation”!

These designs gave me the impression that their "decorations and gimmicks" would make children happy.

That’s true. What I had in mind was what taking what “Rockman X (the game)” meant back in its day - the increase in expression and graphical fediality from shifting to Famicom to Super Famicom - was the idea that “Rockman has powered up and become “X”!” I wanted to recapture that feeling with these designs, the "decorations and gimmicks" that they have.

Mr. Nakayama’s designs were stylishly “subtracted” designs. Using that as a base, I added AND subtracted to achieve a balance; that was the hard part.

The “Rockman Zero” designs were very complete to begin with, so when I subtracted things arguing “these parts aren’t needed”, it ended up being the same “Zero” design that Mr. Nakayama did (laughs).

How much do I add, how much do I take away… that was the thing that troubled me most. Ultimately, the solution I reached was the “thigh” design.

I wanted to change the balance in color distribution, and since the thighs of X and Zero were dark color and purple, I added a big “white” part to achieve a design with a clear solution.

When turned into sprites, white would stand out, making it easy to tell the differences in the game screen.

What’s more, since it’s inheriting the powers of both, the impression of the silhouette cannot be drastically changed.

There was a cardboard box filled with Mr. Nakayama’s rough sketches at the company so I rummaged through them to get an idea of how to do design lines (laughs). 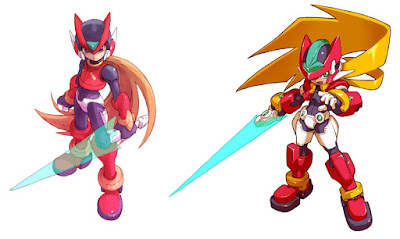 ▲ Zero and ZX. The silhouettes are close but the main theme was to make it clear they were different entities.

Mr. Nakayama said it in the past but he’d never properly drawn the shape of “Original X” within the “Zero” series.

True, that was the case.

Among fans and some fanart the legs of Original X and the thighs have a “white” impression to them. That makes me happy that their impression of Model X managed to make an influence in the world of the “Zero” games.

▲ This is the Cyber Elf version of X drawn by Mr. Nakayama as the main visual of this collection.

You worked on the game scenario so you must’ve been very involved in the building the world of ZX. Was there an idea to draw a world that was different from “Rockman Zero”?

Yes, that’s correct. The strife between humans and Reploids comes to a reconciliation and an end with “Zero 4”. In the world of “ZX” there’s no longer any feud between the two of them.

The theme of “ZX” was to depict issues and confrontations that would happen in the future. 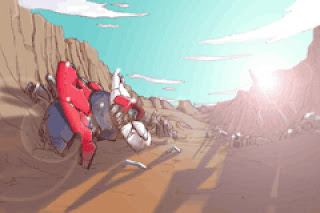 ▲ The end of Zero 4. A period is inserted into the feud between both groups.

OK! That’s all for today! In the next part we’ll finally talk more in-depth about designing the ZX characters! Look forward to it!
Posted by Reploid21XX at 9:55 AM