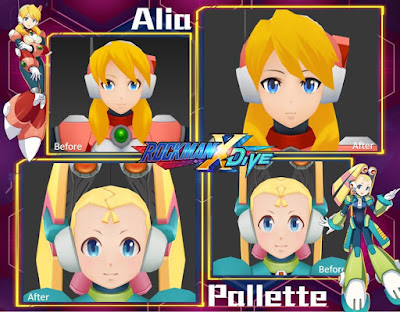 Leading up to the eventual launch of Rockman X DiVE on iOS and Android devices, the development team at Capcom Korea have provided fans with a little peek at some cosmetic changes being made to Alia and Pallette. As you can see above, the extra polish has allowed the Navigators to appear more "on model". Pallette in particular looks more like herself.

Now, as for when we can play the final version of Rockman X DiVE, well, we really don't have an answer anymore. Originally, Capcom Korea intended on launching the game before the end of 2019 and holding a public beta test as well... all before January 1st, 2020. That was the goal. However, the development team haven't said much, if anything about dates since October. Pending official word from Capcom Korea, we can only assume Rockman X DiVE has been delayed into 2020.

With Mega Man's 32 anniversary and Mega Man X's 26th anniversary happening in just a couple short days (December 17th), perhaps that will be an opportune time to announce the new release date... or shadow drop the game itself. We shall see!