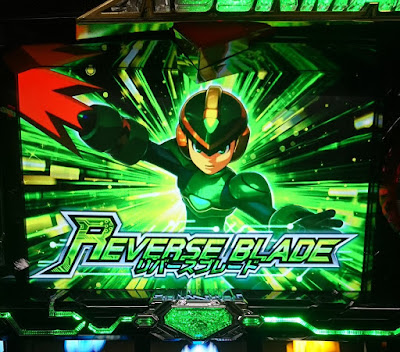 Well, Special Weapons are confirmed for Pachislot Rockman Ability. This bit of news comes to us by way of entaraina, who seemingly has the game in-hand a whole month early.

"Reverse Blade" is Reversi Man's Special Weapon (you can see what Reversi Man looks like here. He's the third bot from the left). Speculation says it could enable players the ability to reverse the machine's roulette wheel. That sounds like a fairly reasonable assumption, if you ask me.

Also, it looks like Reverse Blade will change the appearance of the Rock Buster. We can probably expect the same thing from the other Special Weapons too. With Rockman Ability "leaks" dropping almost daily, we probably won't have to wait too long to see the rest!