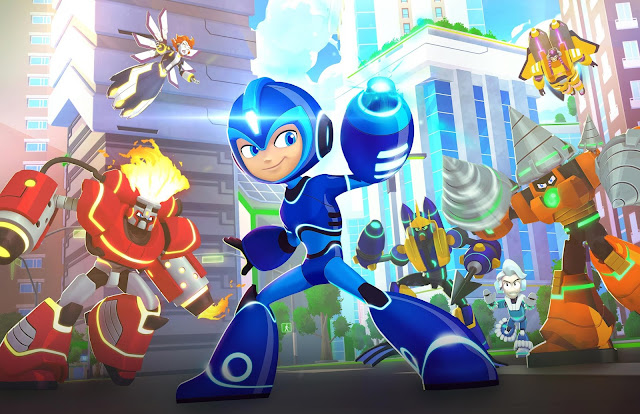 The titles and descriptions for several new Mega Man: Fully Charged episodes have been revealed via Futon Critic. It looks like theere's going to be quite a few new and familiar faces coming down the pike!

Episode 12: "Opposites Attract"
Fire Man and Wave Man team up to evaporate the city's water supply, forcing Mega Man to team up with an ally of his own-Suna.

Episode 16: "Power Cycle"
After replicating Elec Man's powers, an underslept/overcharged Mega Man goes on a 24/7 hero spree that ends up turning him into his own worst enemy.


Episode 17: "Bored to Be Wild"
Mega Man teams up with his crush, Ashley Adderley, to solve a series of science riddles left by Chemical Man, who's plotting to turn all the city's metal into rubber.

Episode 18: "Enter the Wood Man"
Mega Man accidentally awakens Wood Man, who thinks it's still the Hard Age, sets off on a path of destruction toward Silicon City.


These episodes are expected to air over the next several weeks on Cartoon Network, according to Futon Critic. No word yet when they'll hit the CN app or website. Stay tuned!
Posted by Protodude at 10:07 AM