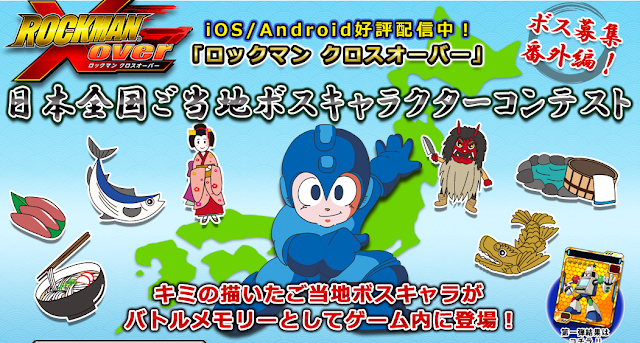 No less than a few months after the previous boss contest, Capcom is kicking off one more for everyone's favorite iOS/Android app Rockman Xover. This time there's a theme: they're looking for entries that represent each of the 47 prefectures of Japan.

Indeed, this one is going to be difficult to enter if you don't live in Japan. But you can look forward to the contest's byproducts: a batch of new Battle Memory cards. According to Famitsu's report, 11 grand prize winners will have their characters made into Battle Memory cards (as opposed to being made into an actual boss) . They will also receive a special Battle Memory available only to contest winners, and an E Tank water bottle.

Nico Nico Seiga is handling the submissions once again. The dealine is September 2nd, and we should start seeing the winning Battle Memories in early October.

Source: Famitsu (via The Mega Man Network)
Posted by Protodude at 12:49 PM