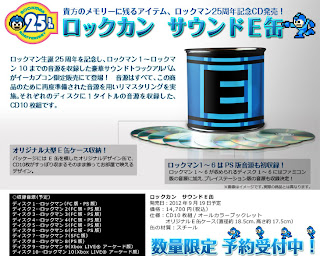 If you're a fan of Mega Man music, you might want to start saving up for this.  To commemorate the Blue Bomber's 25th anniversary, Capcom Japan plans to release a sizable soundtrack collection called the "Rockcan."  Inside its lovely E-Can packaging, you'll find ten discs of music from Mega Man 1 to Mega Man 10 (PlayStation "Complete Works" remixes included). Curiously, Mega Man & Bass and the five Game Boy games are not represented.  Or Mega Man Soccer.  That's a little disheartening but, hey, at least you're getting a nice full-color booklet, too!

The collection isn't due out until September 19th for 14,700 Yen (roughly $185).  For the time being, it's an e-Capcom exclusive.  I suppose now is as good time as any to begin begging and pleading Capcom USA to bring it stateside. If that fails, well, there's always Ebay.

I believe a quick 'hurray' is in order, everyone: this is the first official 25th anniversary-related announcement.  Now, let's just keep those fingers crossed for something a bit more juicy down the line...