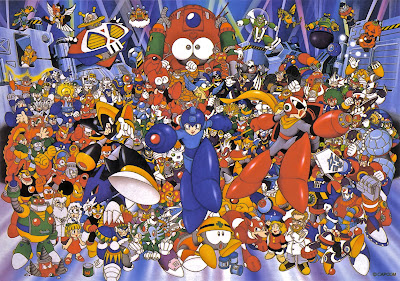 "At Rockman Day, play and make good cheer, for Rockman Day comes but once a year."

June 9th is here, and fans across the net are celebrating the annual tradition of "Rockman Day."  For the unfamiliar, Rockman Day is a holiday of sorts celebrated on June 9th as a way to commemorate the Blue Bomber.  It falls on June 9th because of the Japanese's tendency of creating words from sounds. "Roku” is 6 and “Ku” is 9.  Put them together and voila!  You have "Rokku."  Ever wonder why the number 69 occasionally shows up in so many games and merchandise? Well there you have it.

Rockman Day is more or less a meme that began within a circle of Japanese netizens a couple years ago.  The occasion quickly made its way overseas, followed by official recognition from Capcom last year.  There isn't any sort of specific plan or thing you're supposed to do on this grand day; rather, the day is what you, the fan, make of it.

That's all there is to it, really.  So kick back, relax and set some time aside today to have a little Mega Man flavored fun. Play some games, read some comics or manga, or maybe whip up some cool fan-art (Update: Like this). Own the day however you see fit. Just, uh, don't go too crazy on the E-Tanks, yeah?