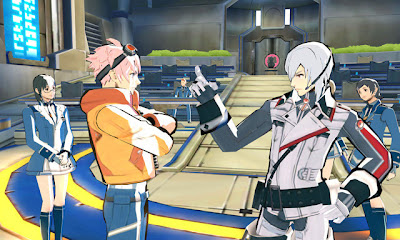 This past week, a conspiracy theory's been brewin' about E.X Troopers, the cel-shaded Lost Planet spin-off for the Nintendo 3DS and PlayStation 3. Purportedly, E.X. Troopers is a regurgitated Mega Man Legends 3 built around the latter's assets; gameplay mechanics, graphical style and character design. This video sums up the theory nicely.

Naturally, the discerning masses took to Ask Capcom to get to the bottom of this. It wasn't long before Seth Killian popped in to sort things out:

"For what it's worth, I can tell you I played an early version of this game (which was styled in the same way, and with what looks to be similar gameplay) in Japan well before the Legends project ran into trouble.  It is definitely not a reskinned Legends.  I have not played EX Troopers for quite a while, but once more details emerge about the gameplay, I think it will become clearer that this is the case.

At the time I played it, the projects did not share members. Since the MML3 team is now on other projects, it's conceivable some are working on this title, but that would be the extent of the overlap so far as I know."

And there you have it. I admit the two still look a bit alike, but I think that's largely due in part to the presence of Capcom's MT Framework engine. If you recall, MT Framework was developed alongside the original Lost Planet with a then-hypothetical Legends 3 in mind. Flash forward to 2010 and sure enough, Legends 3 was reportedly powered by the very same engine.

From the looks of it, E.X Troopers seems to be powered by MT Framework (or something very similar). And honestly, that's pretty much all the two games share. The blonde haired kid? Meh, it is what it is.