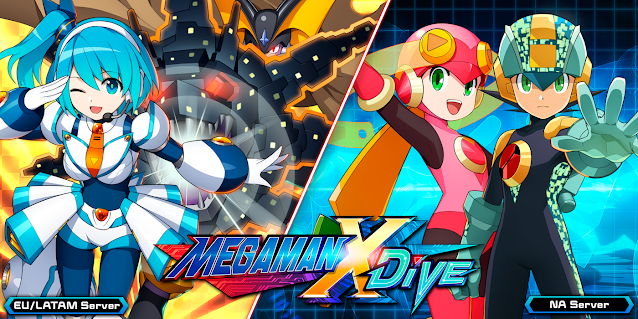 In this week's Mega Man X DiVE global version update, MegaMan.EXE Hub Style and Roll.EXE make their debut. Plus, the Network Domination Project event continues in the NA server while the EU and LATAM servers move on to week two of the global version's 1st anniversary celebrations.

The NA server saw the addition of the Network Domination Project event stage last week. However, it didn't come with the MegaMan.EXE Hub Style or Roll.EXE's gacha capsule as many players expected. The dev team opted to release Bass XX first.

But this week both characters are coming to the NA server in a single gacha capsule. No free pulls for this one. Their DNA Code will be available at a later date.

A special "Pre-Black Friday" Flash Pack will be available this week as well. It will only be available for 10 minutes during the developer's weekly live stream.

When it comes to the EU and LATAM servers, they will move to the second week of the first anniversary celebrations with a new gacha capsule packed with RiCO and Bass GS.

The capsule itself won't have the usual DiVE Fest free pull. Instead, players will get two tickets to activate the capsule for free during the 1st and 7th day login bonus. Each ticket accounts for single free 10-pull.