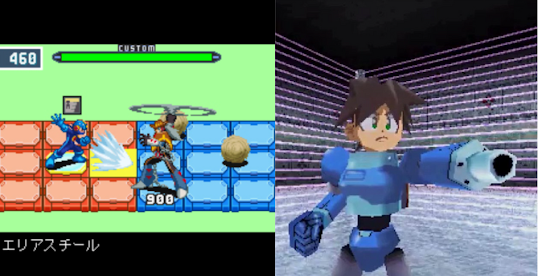 It’s been just over a year since our first progress update on the different Rockman feature phone preservation projects. This guest post by team leader RockmanCosmo will catch you up on everything that’s happened since. Read on!

First off, the Rockman EXE Phantom of Network/Legend of Network and Rockman DASH: Great Adventure on 5 Islands! preservation projects have been merged into a single, all encompassing project that aims to preserve all Rockman feature phone material.

Second, the war in Ukraine has significantly affected our progress over the last several months. Kraze, a key member of the project, resides in Ukraine. He handles our different test phones. Kraze is safe.
In an amazing act of perseverance and courage, Kraze left his bomb shelter in the early months of the war to rescue the project’s test phones and equipment. When he returned to the shelter, he continued testing and assisting the feature phone community. The appreciation we have for Kraze’s tenacity and contributions cannot be put into words. If you would like to support him during this challenging time, you can check out his fundraiser here.

Now, I’d like to discuss the progress we’ve made on each game. Kraze’s technical progress report from last year still applies to Rockman EXE Phantom of Network and Rockman EXE Legend of Network. We’re still trying to dump the phone model’s NAND chip. Once that happens, we can analyze it for file system structures. From there, we will analyze the file system to determine a way of locating where the game files are located on the phone.

Unfortunately, our programmer has run into some difficulties reading the NAND chip. Despite our best efforts, they cannot read past the first block of data. Luckily, this first contains the code of the initial bootloader stage, according to team member /bin/cat.

Currently, Kraze theorizes that if we can successfully reverse-engineer the bootloader, we could get a full dump of the NAND chip. We’re also researching other possible methods of getting into our phone’s file system. For example, our phone has a web browser called the i-mode browser. If we could find a way to connect the phone to an i-mode compatible network, we could access the full i-mode browser and try to find an exploit. Doing so would require us to essentially make our own carrier network. That’s something we should be able to do with OpenBTS.

Another method involves acquiring the DoCoMo femtocell and spoof its GPS to work outside of Japan with our phone. As you can see, there are many possibilities with the Rockman EXE phone!

We’ve also made progress on finding a way to decrypt Rockman DASH: Great Adventure on 5 Islands! If you recall from last year, we found 5 Islands' encrypted game files on a phone’s microSD card. Decrypting these files is an extremely difficult task; many pieces have to come together to crack the microSD’s C2 cryptomeria cipher. These include the encrypted data, an s-box, and phone-specific decryption keys.

Team member /bin/cat managed to find the SD card’s s-box. With his help, we were able to perform a more complete dump of our microSD card’s contents. However, we still need a device key which we’ll extract from the phone’s firmware. Once we get that key, we’ll hopefully be able to access the game files, assuming there aren’t further layers of encryption.
That’s the gist of what we’ve accomplished over the past year. To quote Protodude himself, “It’s a marathon, not a race.” I want to play these games as much as you do, certainly. But it’s important to emphasize that our team is in uncharted territory; nobody has ever successfully extracted a commercial feature phone game before. This isn’t hyperbole.
We thank you for your continued patience over the past year. As project leader, I want to remain as transparent with the public as possible about our progress. I aim to update you more frequently. If you’ve got any questions about the project or if you’d like to help our team out, feel free to contact me or Protodude.
In the meantime, please look forward to an upcoming guest post of mine where I discuss some other obscure Rockman feature phone games! Thank you again for your continued support!
Posted by Protodude at 5:36 PM