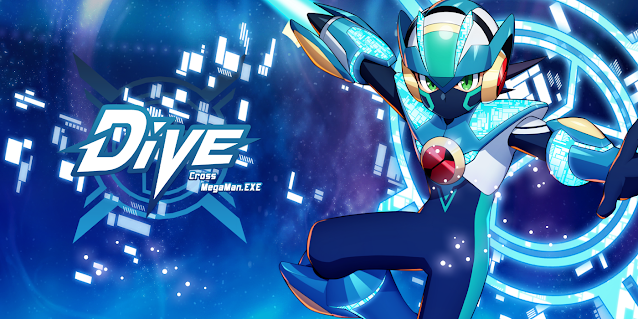 With DiVE Cross MegaMan.EXE now available in Rockman X DiVE, many players are wondering about how this character fits into the Deep Log's overarching story, let alone the design process behind it.

Fortunately Capcom Japan has us covered. We've got all the details via the game's official website and Twitter. Check all of them out after the break! 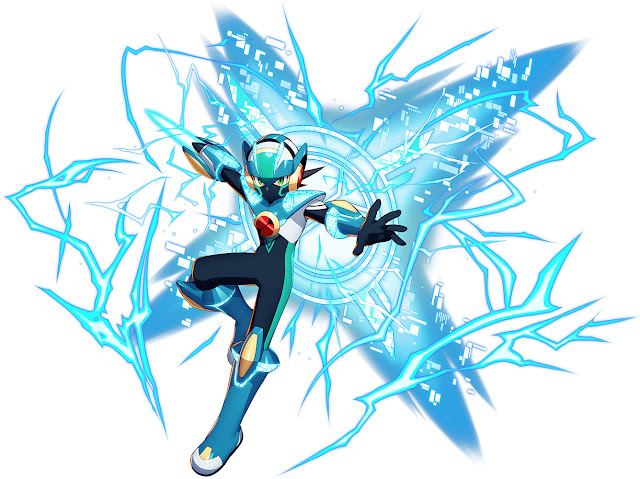 The "DiVE Armor," a new armor system created in Deep Log, was the result of RiCO's research.

By combining this system with the "Get Ability Program" that appeared in the Rockman EXE series, she succeeded in giving Hunter Programs powers beyond the Rockman X series. The "DiVE Armor" was the fruit of her research.

In terms of the DiVE Cross Rockman.EXE armor, RiCO wondered if the power of the DiVE Armor could be used for Hunter Programs from various series.

The first thing that came to mind was Netto and Rockman.EXE, with whom she had worked together in the past. At that time, she agreed to visit their world, but she wanted to bring a present to surprise them. She considered the possibility of attaching the DiVE Armor to Rockman.EXE's Hunter Program, but her attempts to do so were unsuccessful.

iCO, perhaps unable to bear seeing RiCO trying to throw it all away, said to her: "There's nothing you can do. You have to stop now."

"Hey iCO, weren't you going to help her?! Listen, RiCO, essentially a Cross System requires a process where you have to establish a bond with the original NetNavi and be recognized as a "LinkNavi." I don't have to explain any more than that, do I? So, the DiVE Armor needs to be set up as a LinkNavi, and the user, Netto or Rockman.EXE, needs to be informed of this. Now, once that's decided, we need to set it up and go explain it to them!"

RiCO: "(Preliminary explanation... but then that would not be a surprise for them...)"

Although her original plan to surprise Netto and Rockman.EXE fell through, RiCO said, "Then I will shift gears and surprise the Player! The Player who is on duty in a certain area is having a moment of remembrance! Indeed, what do you know, I had prepared a lovely Hunter Program to go along with it, just to make them happy! This is the fusion of Rockman.EXE and DiVE Armor. It's so cool and strong! What do you think, Player?!"

For once, ViA and iCO warmly watched over RiCO. First of all, what are the highlights (what you want people to see) of this new look of Rockman.EXE, the DiVE Cross Rockman.EXE?

The order was to put X's DiVE Armor on Rockman.EXE, so we used the elements and colors as they are.

The DiVE Armors mainly use effects to create a cyber feel, but since EXE has electronic characters to begin with, we used the shape of the shoulder armor and chest armor as one piece to make it look less analog.

There are many differences between the character designs of the EXE series and the X series (for example, the thinness of the arms and legs). Since this is how he looks in Rockman X DiVE, was there anything you had trouble with or had to modify in order to integrate the features of the EXE characters with those of the X series?

The silhouette of X's armor is almost set in stone, and we think about what to add to it, but the form change for EXE is far more difficult to design because we have to create the form from scratch every time.

Moreover, this time, since the character will line up with characters from other Rockman works, we dared to keep the original Rockman.EXE silhouette (thinning from the elbow and knee rings at the wrists and ankles) to differentiate it from the others.

What does the pattern on the face guard represent?

It is based on the letter "X" since it is a collaboration with the X series.

The DiVE Armors had a distinctive wing-like effect on the back. The DiVE Cross Rockman has a similar effect, but what is it based on?

As it's DiVE x EXE, it is a combination of Rockman's navi symbol and X.

The angular shape of the sides of the helmet's ears, for example, gives the vibe of the X series, but the overall impression is that he is still an EXE character.

The challenge was how to incorporate the X series armor into the design line of EXE, so we think it was rather the X series line that was erased.

Sometimes adding antennas and wings as decoration doesn't fit in with EXE.

In the illustration, he is holding a sword. Is there any reason why you chose a saber instead of a buster?

We received a proposal for a pose with a buster, but it would be too similar to X, so we decided to go ahead with the sword proposal. We believe we were able to differentiate between X = buster, Zero = two swords, Axl = two pistols, and EXE = sword.