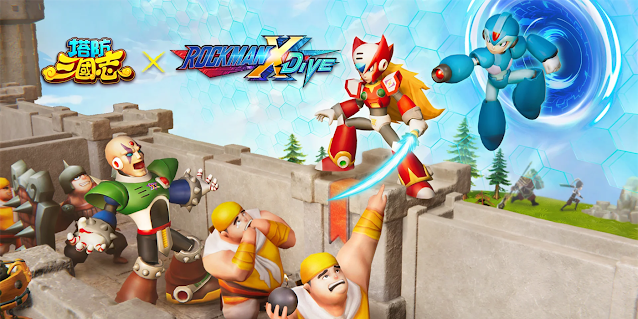 After collaborating with Tower of Saviors and Shironeko Project  (not to mention RiCO's recent appearance in Teppen), Rockman X DiVE is crossing streams yet again with another mobile game. This time it's Tower Defense Records of the Three Kingdoms, developed by the Taiwan-based Morefun Technology Limited.
More details after the break below!

Beginning August 5th, X and Zero will cross the boundaries of the Deep Log into the world of the "Three Kingdoms" to fight Sigma. Below you'll find the most important bits from the official press release translated by our friend Sonny.
The embodiment of justice and peace: X
The protagonist of Rockman X, the manifestation of justice X has entered Tower Defense Three Kingdoms' world to catch Sigma! We have faithfully recreated the battle system from the original games. After activating the skill "Charge", you may reactivate the skill to unleash "Charge Shot"  to destroy the enemy's army! We have also recreated the armor change system, which will upgrade X buster for various visual effects!
The strongest of the Maverick Hunters, Zero!
The strong and popular character, SA Hunter Zero arrives!
Having his signature skills "Rakuhouha" and "Ryuuenjin", Zero surely has his strongest arsenal in Tower Defense Three Kingdoms! A 2-phase rage skill grants him a percentage barrier. He is a formidable unit for his awesome "tankiness" and damage.
Defeat the Collab boss Sigma! And obtain Collab character for free!
The forever boss of Rockman X, Sigma, has invaded Tower Defense Three Kingdoms! Collect the items obtained from the time-limited event "Beat Up Sigma" and you may trade them for "X" and other valuable items!
Paying homage to the originals, collab-exclusive mount and equipment!
The Three Kingdoms warlords have their signature mount, and of course X and Zero will have theirs too! The collab-exclusive mount features the design and name from Rockman X DiVE and translated the design into a hover bike, that's Atomic Shadow EX! There's also other exclusive equipment like "Portable E Tank" and "Helmet Armor chip" etc. Obtain them and substantially increase X and Zero's combat power!
---------------------------------------------
Of note this game is only available in Chinese. But if you wish to experience the collaboration anyway, you can download the game via Google Play. There's no region restrictions, thankfully.
Source: GNN
Posted by Reploid21XX at 4:51 PM