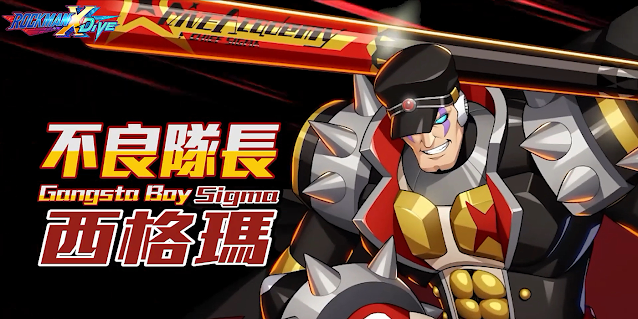 The Rockman X DiVE development team threw a curve ball with an event few could have predicted. This week, the chief of the DiVE Academy joins the Deep Log... Gangsta Boy Sigma.
Find all the details after the break!
Gangsta Boy Sigma's first active skill is Duel Invitation. Sigma sends an invitation letter to the target to deal damage and inflict slow status. When he gets close to the enemy, he gains a damage boost.
His second active skill is Lethal Combo. Sigma punches and lunges forward to deal damage to targets along the path, releasing a shockwave afterwards. He can gain a shield when using this skill too.
One of the passive skills will cause immobile status after Lethal Combo hits the target, granting enhancement status that reduces damage. Other passive skills will allow him to gain enhanced CRI.
This bad boy will join the game this next Wednesday to wreak havoc during the Campus Festival. He's a limited character too, FYI.
The event and Sigma's design is based on the Banchō trope. By the looks of it, his character intro animation could be an homage to Jotaro of the JoJo's Bizarre Adventure.
Let's us know what you think in the comments!
Posted by Reploid21XX at 10:41 AM