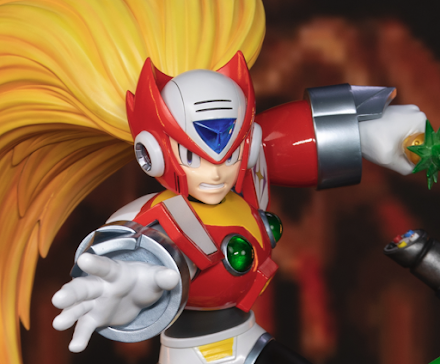 First 4 Figures' on-again, off-again Zero statue looks to be making some serious headway. Following up on a tiny teaser earlier this year, F4F posted the above image to Facebook earlier today. And... he looks great!

Seriously; the difference here is night and day. Compare it to the unreleased 2014 version. Or the oddly-proportioned 2017 attempt. I think they nailed it this time.

F4F writes, "Our sweet Mega Man X Zero Statue is coming along nicely! Heads up though, he's going to be around the $700 mark right now - really pushing hard with the factory to reduce but this piece is really complicated, has a nice environmental base and the light ups on this is insane."

Those interested can sign up to be notified when pre-orders go live here. Fingers crossed this one goes the distance!

Posted by Protodude at 5:30 PM