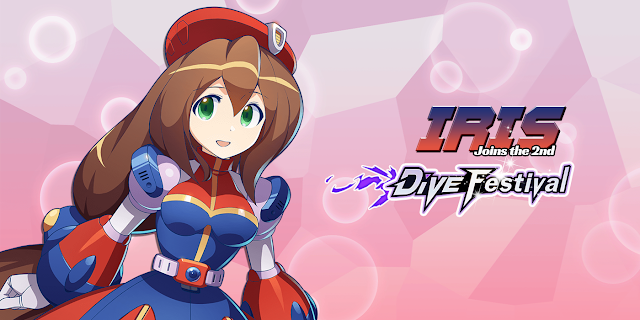 She was teased earlier this year and shown prominently on the the game's main menu since Rockman X DiVE launched. The anticipation has been building up for months... and finally, this week, one of the most popular female characters in the Rockman series arrives to Rockman X DiVE in time to celebrate the 2nd DiVE Festival. Iris is finally is here!

A few hours later, they went ahead and fully announced that Iris is coming tomorrow to Rockman X DiVE plus numerous additions to the game on top of what was announced yesterday.

Iris will be a limited character that will only be available for the duration of the DiVE Festival banner starting tomorrow at 16:00 (UTC +8) until June 18th at 13:59 (UTC +8). The development team has reported that Iris won't have a voice when she becomes available tomorrow due to the effect of COVID-19 in the development of the game. Her voice will be added at some point in the future.

The Hunter Badges are back, too. Be sure not to play “BOSS Challenge” and “Co-op” until the event is out to maximize your chances to get Hunter Badges.


As reported yesterday, some characters skills have been tweaked. Here is the full list of changes:

Additionally, even more details about tomorrow's major update were revealed:

Iris' reveal shouldn't come as a surprise to anyone. We knew she was coming and they didn't try to hide it. The element of surprise, even if they tried, had no effect whatsoever. But what about the character herself? Are you excited to play as her? Let us know in the comments!
Posted by Reploid21XX at 8:52 AM