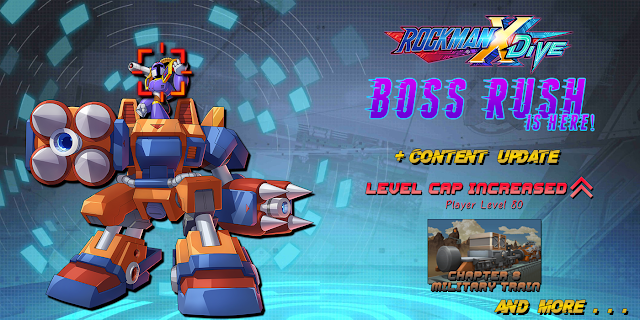 The Rockman X DiVE development team announced today that the second part of the major content update is coming this Thursday, June 11th. Find all the details after the break!

With the second part of the major content update, the game will welcome a new game mode, Boss Rush, where players can fight against Chill Penguin, Mega Scorpio and Goliath. The event start this Thursday at 04:00 (UTC +8) and ends on June 17 at 10:00 (UTC+8).

Player level will be increased to level 80 as well. With this, we will be able to raise our weapons, chips and strengthen armor to level 80. Oddly enough, the trailer put an emphasis on combining armor level 70 but that's something that we have been able to craft for awhile. Perhaps they made a mistake and should have showed us armor level 80, which usually goes hand-in-hand with the level cap?

Lastly, they are announcing some adjustments to many characters' skills.

Did you pay attention to the video? Did you see a certain female Reploid in the character selection screen? Let us know in the comments!
Posted by Reploid21XX at 9:58 AM