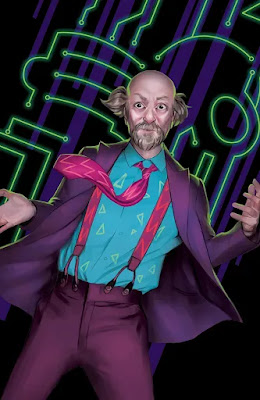 The variant cover art for Mega Man Full Charged issue #2 just dropped and a closer look at the comic's Dr. Wily incarnation. He's clad in a purple suit, wearing a purple tie laced with the letter "W" and, to complete the package, suspenders over the shirt from Rocko's Modern Life. Oh my.

We know next to nothing about the Boom! Studios Dr. Wily. This cover, illustrated by Miguel Mircado, gives off a very eccentric-like quality. A little bit of Doc Brown or Bill Nye? Then again Wily is depicted as an enigmatic figure on the standard issue #2 cover. Regardless, it will be interesting to see where Boom! takes this version of the character. It could be unlike any Wily we've seen before.