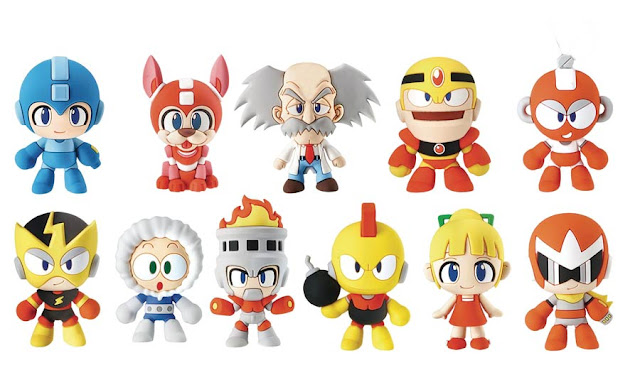 We've known about these little guys since May, and it sounds like they're starting to pop up in the U.S. According to Rockman Corner readers Jimb0, RockMax, and Derek, individual blind packages of Mega Man Figural Keyrings have been spotted at Target and Walmart in Washington, California, and Michigan, respectively. Characters include Mega Man, Rush, Dr. Wily, Guts Man, Cut Man, Elec Man, Ice Man, Fire Man, Bomb Man, Roll, and Proto Man.

A few online retailers are loading up on these guys as well. Toywiz, Box Lunch, and eStar Land to name a few. Distribution is relatively new so we'll definitely be seeing these figures pop up elsewhere, too. Either way, these might make decent stocking suffers!

Thanks for the tip, fellas!
Posted by Protodude at 2:28 PM