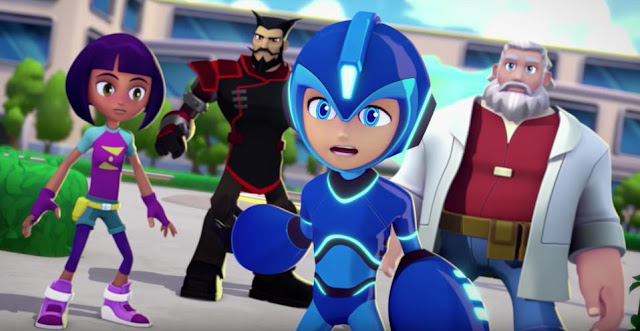 When it was first announced that Mega Man Fully Charged would be airing on Cartoon Network, we pretty much unanimously arrived at the same conclusion: CN would inevitably send it out to die. And so here we are... maybe.

According to recent listings from both Cartoon Network schedule archive and TV Passport, Mega Man Fully Charged has been removed from its usual 6:30am EST timeslot on Sundays to... nowhere. No reschedule, no "mid-season" break announcement – it's just gone.

Fortunately you can still watch episodes online (new episodes are still coming out) and on-demand via US cable providers. But for all you folks who eagerly wake at the crack of Sunday's dawn for new episodes, well, I'm sorry to say it's not looking too hot. From little-to-no marketing to an early morning death slot, Cartoon Network knew exactly what they wanted to do with Fully Charged from the get-go. Sad but not unexpected.

Now, does this mean the show is dead dead? Pending official word from DHX and Cartoon Network, it's hard to say. However, according to a tipster over at The Mega Man Network, the show could very well live on through Boomerang. With reruns currently airing on Boomerang since August, the possibility certainly exists. Hey, it worked for Sonic Boom.

As for the rest of the world, Fully Charged just started airing in Canada and will be heading to the UK shortly. Hopefully it'll stick around there for a little while. But all in all, I'm not feeling too confident here, guys.

Source: The Mega Man Network
Posted by Protodude at 10:10 PM