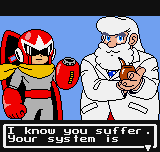 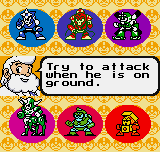 Eighteen years after its release, you can finally play most of Rockman Battle & Fighters in English. Marc_Max has released an work-in-progress translation patch on ROMhacking.net. It translates ALL in-game dialogue, character interactions, and some menu prompts into English. The only things not translated are Main Menu graphics and the Database. Other than that everything is very much in a legible, playable state.

For the uninitiated, Rockman Battle & Fighters is a bite-sized compilation of Rockman: The Power Battles and Rockman 2: The Power Fighters for the Neo Geo Pocket. And if you've played either of those games, you know what's going on here: all bosses, all the time. It's a very simple, pick-up-and-play boss rush with some excellent sprite work to boot. It's worth checking out.

Posted by Protodude at 7:25 PM