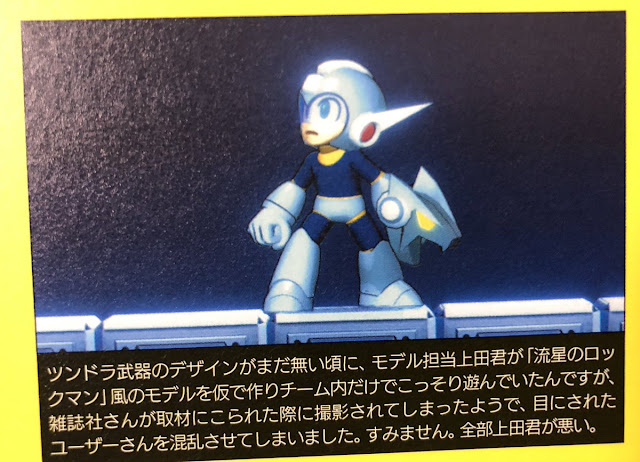 The mystery of Mega Man 11's unused Mega Man Star Force costume, which was first seen in the pages of Game Informer's January 2018 issue, has at last been solved. According to developer commentary featured in the Rockman 11 Production Note book, the costume was indeed created as a placeholder for Tundra Storm.

They write, "When there was still no design for the Tundra Man weapon, Mr. Ueda created a Shooting Star style [Star Force] model as a place holder during development. It seems the magazine journalist that came took a photo of it... Sorry for confusing fans. We blame Ueda."

And there you have it. Sadly it doesn't look like there are any plans for the costume to be distributed as DLC or anything like that. But hey, maybe next time? I always thought the idea of being able to, say, purchase costumes based on different Mega Men from Dr. Light's lab kinda enticing. I mean, that's what I initially hoped what was going on here.

(Thanks to 4am_sandlake for the image and Hayden for the translation!)
Posted by Protodude at 7:30 AM