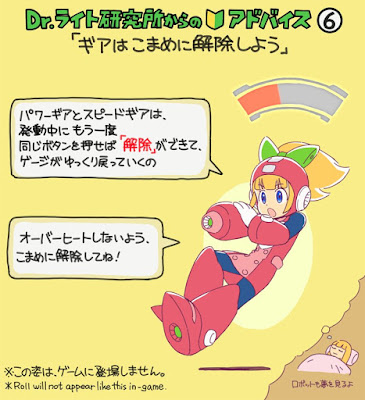 For the past couple weeks the official Rockman Unity Twitter account has been posting little Mega Man 11 tips called "Advice from Dr. Light's Lab". Each tip includes new artwork of Mega Man 11 characters, and this one – "#6: Release the 'Double Gear' Diligently" – features Roll decked out in her very own "Mega Man" gear. Coupled with the prospect of post-launch content, this piece has some fans hopeful that playable Roll DLC is coming. But is it really?

So here's the deal: a cropped version of that image has been making the rounds, and it's missing a key element. The original image has a message to fans that reads, "Roll will not appear like this in-game". Do note that, out of all the Japanese text in that image, this is the only line that's translated in English. I think it's safe to say Capcom really want you to keep your expectations in check here. That's my interpretation, at least.

Regardless of this image's intent, I think we can all agree it's time for Roll to be playable again. She was last playable in the Japanese-only Rockman 1 mobile port and before that, Mega Man Powered Up. If Mega Man 11 DLC really is on the burner (it could be) would Capcom really pass on the opportunity?