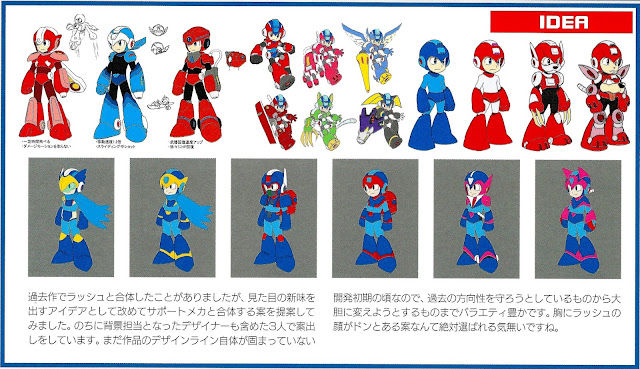 Courtesy of my buddy Hayden, here's another translated page from the Rockman 11 Production Note. This one deals with the many unused transformations based on support characters.

Here's the developer's commentary in English:

"In previous titles, Mega Man has combined with Rush. So I suggested a few fresh-looking combinations with the support characters in the game. Eventually the background designer joined in and three of us were working on these designs.

This was still during the earliest point in development when there wasn’t yet a decided look for the game, so there is a range of designs that capture the look of older games and some that are drastically different. There wasn’t an ounce in me that thought the design with Rush’s face slapped on Mega Man’s chest would be chosen."


Could you imagine a game where Mega Man could combine with Beat, Tango, and even Treble? The idea was certainly explored in Mega Man 11's development but, alas, it was merely a spring-board for the final game's Robot Master-based forms. Maybe next time?

Also, look at the bottom row, second on the right. See anything familiar? That form is clearly inspired by a very early, "Super Mega Man" concept. Neat!

Thanks again to Hayden for the translation and Rock Miyabi for the scan!
Posted by Protodude at 11:09 PM