Keiji Inafune: "I Own All the Problems That Came With [Mighty No. 9]"

The saga of Mighty No. 9, Comcept's long-awaited spiritual Mega Man successor, has been one rife with difficulties and frustration. However, amid the game's launch, Keiji Inafune didn't shy away from the criticism: he freely admitting these problems were all on him. 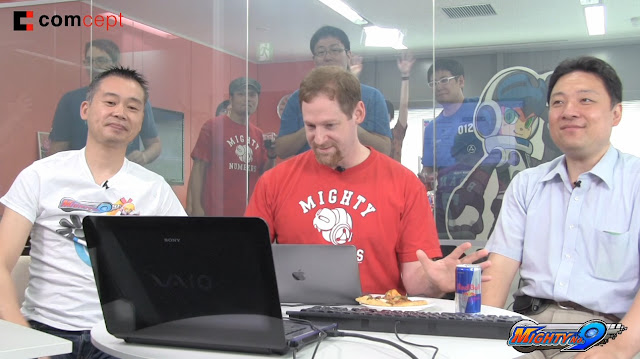 On a recent stream celebrating Mighty No. 9's launch, Keiji Inafune - joined by Comcept team member and translator Ben Judd - answered a number of questions about the development process. Early on in the discussion, Inafune admirably chose to own up to the game's run of problems.

"I want to word this in a way to explain some of the issues that come with trying to make a game of this size on different platforms," he began. "I’m kind of loath to say this because it’s going to sound like an excuse and I don’t want to make any excuses. I own all the problems that came with this game and if you want to hurl insults at me, it’s totally my fault. I’m the key creator. I will own that responsibility."

Inafune continues to address more topics about Mighty No. 9's development. Chief among his comments, the now infamous - but grossly misquoted - "It's better than nothing" line. The original quote, coming in around an hour and nine minutes into the stream reads:

"We can hope if things go well, there will be sequels. I can tell you what, I’m not getting my 2D side-scrolling fill. At the end of the day, even if it’s not perfect, it’s better than nothing. At least that’s my opinion.”

The thing is, Inafune did not say "it's better than nothing." These are Ben Judd's words, who traditionally adds his own thoughts when translating for Inafune. It's an honest mistake on Judd's behalf, one that's unfortunately yielded confusion, miss-attribution, memes and a response from Sonic the Hedgehog.


Congrats on the launch, @MightyNo9!

It's better than nothing. pic.twitter.com/WsXHWtAlaX— Sonic the Hedgehog (@sonic_hedgehog) June 21, 2016

The whole stream has a lot of interesting and insightful quotes. You can watch it here, or read select portions below (via Kotaku).

Why making 10 versions of the game at once was a huge mistake:

He said “In my many years at Capcom, and Capcom was known for their multi-platform strategy. But never did they ever do 10 SKUs all at the same time, 10 different versions all for one title.” Traditionally, this is true—I know, we worked with a lot of different porting houses—usually you have the base game and work on the port after the game was done. In this case, it was do the base game and do the port all at the same time. it ended up being a huge amount of work, more than they actually estimated. Definitely, when they looked at the project, they were wrong about a lot of things. They underestimated how much time, work was going to be necessary. All of those things create a huge amount of pressure.

Whether Inafune’s attention was devoted enough to Mighty No. 9's quality:

I’ve [Ben Judd] seen a lot of different comments that suggested Inafune-san was only focused on being a business man and taking the IP and making anime or manga or branching off into a lot of different directions. To your average everyday person, it’s going to seem that way. But the reality is, during production, the key creative pieces really happen for the first 70% and then beyond that, it’s all about doing porting and bug testing. I promise you Inafune-san’s time is best spent focused on taking this IP in new directions. Again, as I said, to be an independent studio and get a chance to own your IP, it just doesn’t happen. It does bring in other opportunities, which is great. I guarantee you [that] you want your independent creators and developers to have their IP, you want them to be able to take them in different directions. It gives you more choices as gamers. I 100% stand by this sentiment.