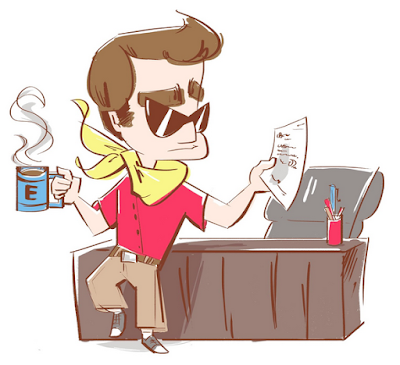 
1) Comicpalooza happened over the weekend... was there any Mega Man cartoon news?

Man of Action - the creative force behind the new 2017 series - did indeed attend Comicpalooza. They held a panel Saturday morning about adapting comic books into successful television series, but no new Mega Man information came to light. I followed the panel as closely as I could from outside sources - alas, we've got nothing.

When can we expect new info, though? Well, the San Diego Comic Con is about a month away with Man of Action, DHX Media and Capcom attending. The Licensing Expo is another possibility; DHX Brands and Capcom both have booths. That kicks off tomorrow. I'll keep an ear to the ground.

2) Will Mega Man NT Warrior ever come to Netflix or Hulu?

From what I've been able to piece together over the years, Viz Media do not have the actual streaming distribution rights to NT Warrior in North America. Mega Man Star Force, currently streaming on Hulu, is a different story. When Viz picked up those rights in '07, they grabbed television and streaming. Remember; for a good while Star Force was entirely exclusive to the now-defunct Toonami Jetstream platform followed by Neon Alley.

Mind you, digital distribution licenses are in a constant state of flux. NT Warrior may one day arrive on Netflix/Hulu, but for the time being those plans are not in the cards.

3) Is the Archie Comic series really over?

Don't let the word "hiatus" instill false hope; the series is over indefinitely.

Not only is issue #55 permeated with an air of finality, but subscribers of the comic received this along with their final issue: 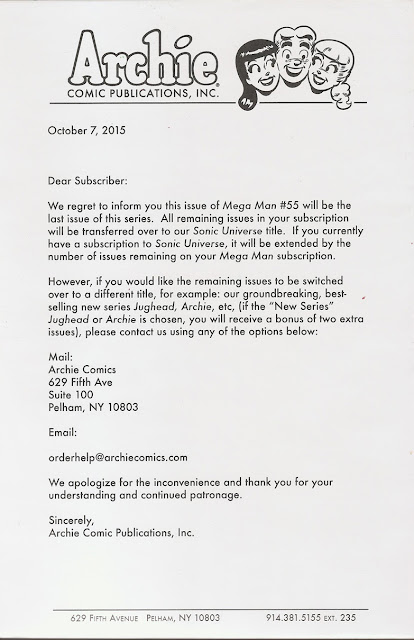 We've yet to hear a specific reason why the series was cancelled. However, speculation says it has a lot to do with Archie cutting their losses in a time of transition, opting to double down on their flagship brand and Sonic The Hedgehog. Mega Man was simply selling too little where ever sale needs to count.

The delay and possible cancellation of a few upcoming Mega Man trade paperbacks is another cause of concern, though this mostly relates to Archie themselves and not their faith in Mega Man. You can read more about what might be going on here.

I will be upfront: I pledged $250. The year was 2013 and it felt good slapping that down on the table. Inafune and co. did a fantastic job capitalizing on several emotions at the time, namely, desperation and a community-wide urge to "spite" Capcom. It worked. It truly worked.

The lesson I (and many others) learned is, when it comes to Kickstarter, you're not an investor. You're a fan, a patron, who wants to see a project come to fruition. Your pledge doesn't guarantee the final product will turn out as great as you imagined it. It's a gamble, a game in itself.

None of us could have anticipated the problems the campaign would face. We were charmed by Inafune's pedigree and fueled by vindictiveness. Come tomorrow, we will now face what our willing pledges bought us. You've got a new game and a lesson to go with it.


That's a wrap for this month. Keep sending questions through e-mail, Twitter or comments. Thanks to the wonderful AnnaMaria Coppi for the caricature!
Posted by Protodude at 3:19 PM