Koji Izuki's Rockman 8 Manga is Getting a Reprint 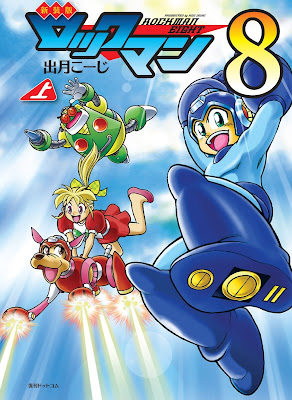 Back by popular demand, Koji Izuki's Rockman 8 adaptation is hitting bookstores in Japan this fall. The first volume arrives in November 21st sporting brand new cover art by Izuki (above). The 260-page tome collects chapters 1-7. Chapters 8-13 will make up volume 2 which itself isn't due until December.

Izuki's Rockman 8 was originally serialized in Comic Bom Bom from 1997-1998. The manga was collected in a single volume in 2011 by BN Comics. This particular release marked the first time chapters 11 and onwards were published publicly since serialization. It remains largely out-of-print.

Even if you don't read Japanese it's worth checking out Izuki's body of work. There's a certain charm to his style that catches the eye. Hopefully UDON will adopt it someday, spreading it to a wider audience. It's an older series... but I say let the old be new again.