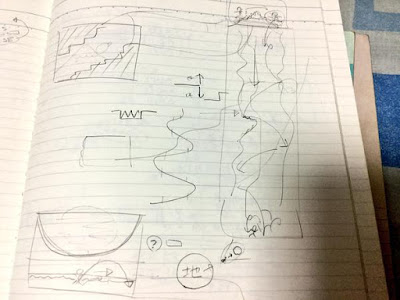 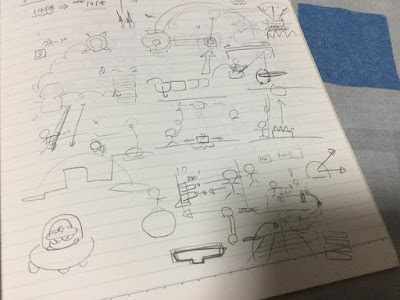 
A special thanks to Sensei Hanzou for the translation:


"The commercial for Mario Maker made me remember how back when I was working on Rockman 6 for the Famicom, I placed the enemies with a tool that ran on top of the game. These days things like that are normal, but back in the day we had to use graph paper etc. Enemy placement went very quickly due to that tool that Mr. F made for me."

"Looking back at this old Rockman idea notebook I had is starting to jog some memories. Memories of bosses I had thought up, like Card Man and Crystal Lady. I had an idea for Climb Man where you would fight him while falling down a cliff." [Probably talking about the second image in that tweet. The first image has a list of boss name ideas, three of which he mentioned. Also on the list are Stardust Man, Train Man, Graviton Man, and Aqua Man (can't quite make out the first name). The word that's circled at the end is the "Lady" of "Crystal Lady".]

"Man, I really just drew whatever popped into my head, haha. For the minor enemies I would just draw the general image I had; there might be some enemies that were based off of these."


There's a couple cool takeaways from this:


Climb Man sounded interesting, too. I'm not entirely sure how fighting a Robot Master while falling would have worked. Maybe something along the lines of a certain mid-boss? Coincidentally, that boss is found in Aqua Man's stage (Mega Man 8).

Well, here's hoping Mr. Mihara will share more goodies from his notebook. I love stuff like this!

UPDATE: Hitoshi Ariga - author of Megamix - points out these notes are likely from Mega Man 5, not 6. He specifically pointed out early versions of Space Metall from Star Man's stage, and Taban from Stone Man's. Not to mention most of the name concept correlate with bosses from MM5. This post has been amended. Thanks for the heads up, rab!
Posted by Protodude at 12:18 AM