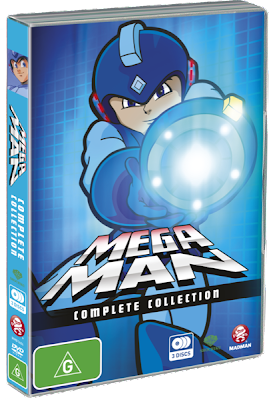 Madman Entertainment's online store has outed the Australian release date for the complete Mega Man animated series box set. The 3-disc set is due out on December 4th, priced at $49.95. And yes, that is the final box art. It's an uncanny throwback to the less-than-stellar PAL Mega Man covers of the mid-2000's.

No special features or extras. For the most part this is a bare-bones reprint of the 2004 set. Discotek Media will be handling the set's North American release, slated for 2014. More news on that front soon.