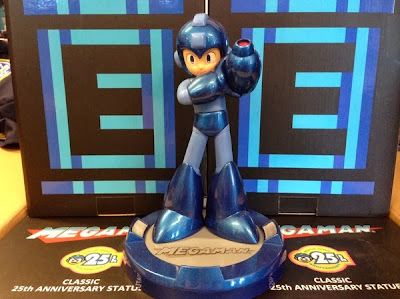 Think you're pretty good at Mega Man 10? Tackle Capcom Unity's leadboard challenge and you could win one of eight free 25th anniversary statues.

Each Friday Brett Elston will name a Mega Man 10 stage on either Xbox 360 or PlayStation 3, and one week later the player with the best time (i.e tops Capcom Unity's "Friend" filter for MM10 'Time Attack' rankings) will win a statue. That same Friday another stage will named and the challenge continues until all eight Robot Master stages are completed. Capcom Unity will do four stages for Xbox 360 and four stages for PS3. In all, eight chances to come out on top.

If you'd like to give this a shot, check out the full details here. Best of luck!
Posted by Protodude at 9:31 PM