More Details on the Mega Man Board Game 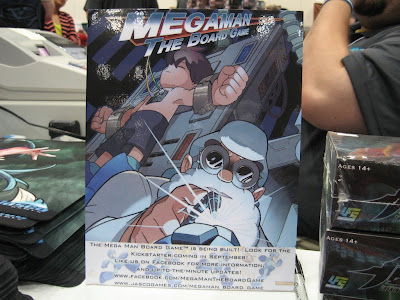 Now that Gencon's done for the day, Boco brings us some additional details on Jasco's Mega Man board game. Mind, the Jasco people are bound to an NDA so there's still quite a few things they were unable to share at this time. Nevertheless, we've got a nice chunk of info (plus Kickstarter clarification) and a couple images to share. Read on for the lowdown! 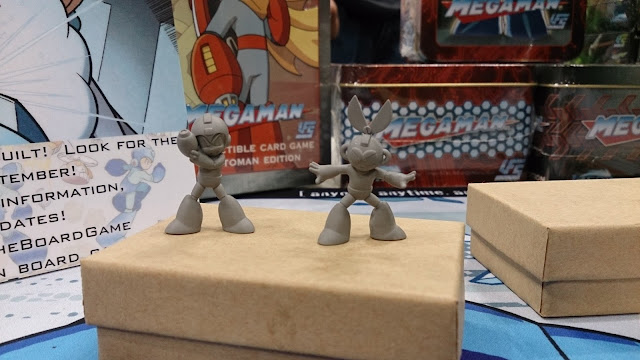 "It's a competitive game for 2 to 5 players. With expansions it will take up to 8 players max. Each player plays Megaman (for now, although they were talking about other playable characters as stretch goals for the Kickstarter). The player to your left plays challenges for you.

The randomizer in the game is a customizable card deck rather than dice or stuff like that. You are trying to be the first person to defeat Wily. In order to beat Wily you have to beat the Robot Masters, and to do that you have to get through the levels. To move through levels you face challenges, the more difficult a challenge the more movement you get from beating it. If you fail a challenge you take damage, run out of life and you die and have to start the level you're on over again. You do gain new powers from defeating RMs [Robot Masters].

The base game will cover the first game (Cutman, Gutsman etc). "Expansions" are planned for the later games that will add the levels, RMs, weapons etc from those games. The current plan is that the expansions will also be complete playable standalone versions of the game, so if you pick up Megaman 3 for example you don't need to already own Megaman 1, but that's still under discussion so it could change. If you DO own multiple you can mix and match the levels, RMs, etc.

Capcom is currently reviewing the game, so depending on their feedback and license requirements the above stuff could change. Also they had a video playing with a bunch of Megaman art including pics of Rock, Blues, and Forte but all the art had *PENDING CAPCOM APPROVAL on it. Especially the number, kind, quality etc of the components is under review as well as the game concepts and rules themselves. So a lot of stuff could change - there's definitely a playable game right now but that might not be the same game that eventually gets made.

About the Kickstarter. The game is going to be Kickstarted sometime in September and the Kickstarter is planned to go through October. The game will be made regardless - they have approval, they have capital to make a game, they have a game to make -  but making games is hella expensive, and depending on the demand (as measured by the Kickstarter) they might be able to make a fancier game with better components etc. (difference in component quality between, say, Monopoly, and a Fantasy Flight game). They really want to make a set of minis for example, with different colors & poses of Megamans for the players, a mini for each RM, etc, but they don't know if that's feasable, or how nice the minis can be (prepainted or not, different mold/pose for each Megaman or not, etc).

All of this is also dependent on Capcom approval too, Capcom might have certain component requirements they have to follow and that might mean a more expensive (to produce) game, which would need a certain level of funding on Kickstarter to achieve. But for now they're planning on making a game even if the Kickstarter fails (which it won't).

They had some really nice 28mm scale (perfect for D&D and most other RPGs that use minis) prototype sculpts Megaman and Cutman on display, but pending approval so they might not be the final design."


That's all for now. More news at it comes!

Thanks again, Boco!
Posted by Protodude at 12:53 AM