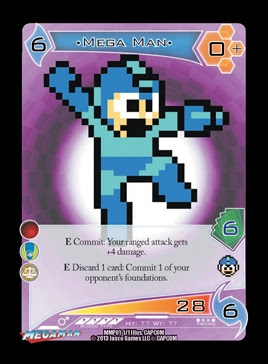 From now until August 25th, DriveThru are selling a promo Universal Fighting System Mega Man trading card for no less than one dollar. No, I lied; it's actually three dollars including shipping (if you're in North America, that is).

Anywho, this will be the first card available to the general public. It features Mega Man in his 8-bit incarnation with stats taken straight from the upcoming Mega Man UFS set. It's three bucks so if you want to see what all the hubbub is about, grab it while you can.

Thanks to Boco and Steev for the tip!
Posted by Protodude at 4:58 PM