A Sneak Peek at the Mega Man UFS Trading Cards, Board Game 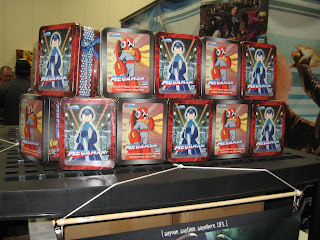 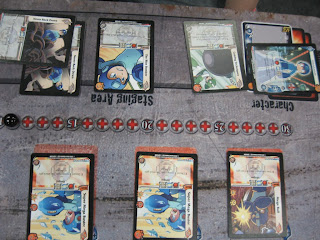 Gencon kicked off today, and as promised, Jasco's Mega Man Universal Fighting System trading card game was on display. For those who couldn't see it in person, our friend Boco managed to snap a few pictures. What's more, he brings us some new information:

"The UFS tins will have the starter deck, three boosters, three Robot Master promo character cards, and a poster/playmat, and will be $30. Out in October I think? I’ve never played UFS so you’ll have to ask someone else for mechanics. But the cards look very nice, with art from the Archie comics. Those vinyl playmats are also pretty killer and I might pick up the one with all the RMs on it."


If you're interested, hit up Boco's Tumblr for more images of the cards, tins and collectible playmat. Now, as for Jasco's other Mega Man product, the official board game, we've got some preliminary news to share too. Read on for the lowdown.

"The board game has its mechanics pretty much finalized, but everything else is up in the air. They don't know what art assets Capcom will 1) have, 2) let them use, 3) let them alter, and Capcom has been keeping pretty close tabs on them to make sure they stay faithful to the property, so the graphic design of the game is mostly not even close to set. The base game will be the first game, there are planned expansions to add characters and levels from the later games, and the game can be played mix-and-match with any set of levels/RMs from any combination of the games. There will be a Kickstarter for the board game starting in September and continuing through the end of October.

A prototype version of the board game will be around for demo tomorrow, but there's nothing on display for it now except test 3D models of the Rockman and Cutman minis. (there will be minis for each of the RMs from the first game)."


Sounds pretty interesting, wouldn't say? The Kickstarter tidbit is a little odd, I must admit. Jasco already has the license to produce the game... but it needs funding? Hm.

Again, check back tomorrow for more news and maybe a few images. In the meantime, if you have any questions for the Jasco guys, either leave a comment for Boco or reblog this Tumblr post.

Thanks, Boco!
Posted by Protodude at 5:52 PM