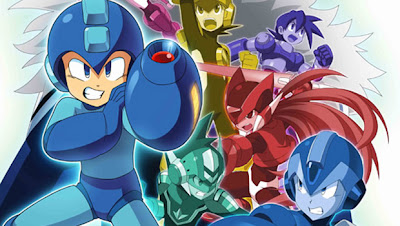 The Mega Man Network has translated an interview with some of the production Rockman Xover staff, which consists of the producer, Takeshi Tezuka, the director, Mr. Matsuura, and two sound team members, "Mr. X" (aka Setsuo Yamamoto) and Masahiro Aoki.

For the most part, the interview covers the process behind Xover's main theme song, written by Aoki. However, we're also treated to brief stories about the inspiration for the game and the original Mega Man X.  Towards the end of the discussion, the staff tease the prospect of a boss character contest. That's right; we may end up seeing fan-made bosses in future updates. Nothing official yet, but they're working on it.

There's a whole heap of info to read, so head on over to TMMN and check out the full interview.
Posted by Protodude at 9:23 PM