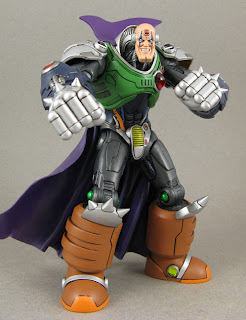 Homebrew figure designer Jin Saotome is a pretty well-known fellow around these parts for producing a number of cool Mega Man action figures. And today he adds one more to the mix: the one and only Sigma.

"He's in scale and design-wise to my X and Zero I made last year and stands a good 8 1/2" tall!", proclaims Jin. "Sigma's plasma saber is removable and I'm making an energy blast or two for him as well. Various glass gems/reflective metallic domes were also used for his ports so that they shine in the light. The wired cloth waistband is removable and Sigma's beam saber was made from a clear acrylic rod."

As always, very, very cool. And yes, Jin is well aware he sort of resembles Buzz Lightyear. BUT it's still awesome. If you'd like to see more of 'ol Siggy, swing on by Jin's place here. And for those who've got some cash to burn, you can bid of the figure right here!

Thanks for the tip, Jin!
Posted by Protodude at 8:42 PM