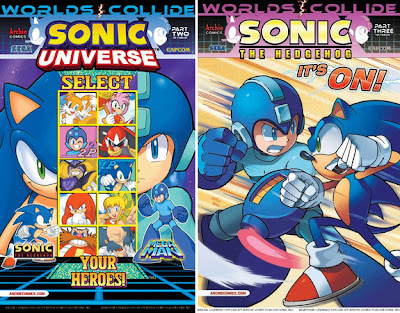 Midtown Comics have revealed the latest solicitation details for the upcoming Worlds Collide crossover. These summaries cover Part 2 (Sonic Universe issue 51) and Part 3 (Sonic the Hedgehog issue 248). Check them out:

"‘When Worlds Collide,’ Part 2 of 12. The crossover event of 2013 continues here! There are strange things afoot as Mega Man’s world is menaced by a super-fast, blue attacker. Sonic’s world is being stalked by a blue-armored figure with a cannon for an arm. Could these mysterious villains be Sonic and Mega Man? Or are they some kind of sinister copies? Mistaken identities and explosions galore in this explosive second part to the historic Sonic the Hedgehog and Mega Man crossover! Continues in this month’s Sonic the Hedgehog #248!"

"‘When Worlds Collide,’ Part 3 of 12. It’s Sonic versus Mega Man – Round One! The fight that every fan of both the Blue Blur and Blue Bomber has been waiting for is here at last, and it looks like Sonic’s got the hometeam advantage! Can Mega Man cope with the Blue Blur in a land of loops? Meanwhile, Dr. Wily is concerned his old rival might cause problems, which sets Dr. Eggman’s sites on Dr. Light! Don’t miss a moment of this historic crossover event as the heroic fights and evil friendships rage on! Continues in this month’s Mega Man #25!"