Did You Know? Roll Was Almost a Damsel in Distress 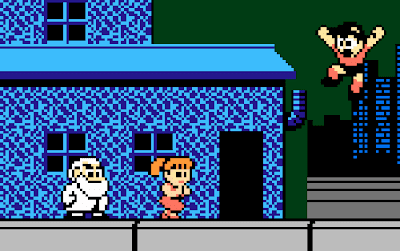 Roll literally had nothing to do in Mega Man 1. Seriously; she just stands there in the ending cutscene. Most players at the time had no idea who she was. Not until Mega Man 3, at least. But in Mega Man 1's heyday, Roll almost had a bigger... role.

The Rockman Character Collection is a 60-page booklet given to those who entered the boss design contest for Rockman 4. Towards the final pages, a round-table discussion is transcribed between Keiji Inafune and other Capcom dev team members. It is here they drop the bomb: originally, Mega Man 1 was about Roll being kidnapped.

The translated discussion comes courtesy of #20 of the Reploid Research Lavatory:

P: Oh that reminds me, at first the story was going to be about Roll-chan getting kidnapped and having to go save her.

K: Oh yeah! And then in the final stages there would have been a giant Roll-chan that appeared as a boss.

I: Sure, and I bet when she made that praying gesture it would fire a giant laser. (laughs)

P, K: There really was something like that planned!


Wow. Mind boggling, no? So many games of that era involved saving a "damsel in distress." Mega Man almost, almost fell into that cliche. And to top it off, Roll would have been an end boss? Too cool. Frankly, I'm a little surprised Capcom never revisited this concept! I don't believe the rescue Roll scenario from The Power Fighters counts. Nor Wishing Upon A Star or that obscure children's book. This could be the plot for a new game entirely.

There's lots of other neat tidbits covered in the round-table discussion. For the rest, please head over to the Reploid Research Lavatory.
Posted by Protodude at 1:35 PM