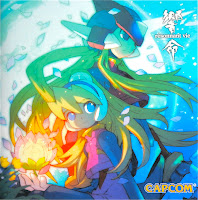 Some time back, Ippo Yamada held a special Rockman Sound Event in Akihabara to commemorate the then-forthcoming Resonnant Vie soundtrack. It was an hour-long jam session, apparently streamed on May 15th as an encore to the December performance. For those that couldn't attend (i.e all of us), a recorded version of the show is now available online in its entirety.

Embedding is a bit wonky at the moment, so check out the show's official Stickam channel to watch. If you've got the time, I implore you to give it a watch -- top notch performances headlined by none other than Inti's own sound team and Hitoshi Ariga.

...wait, Ariga? Yup. The man behind Rockman Megamix took some time out of his busy schedule to perform with the group! With the nickname "Mr. Tambourine Man", it's not too difficult to spot him amidst the crowd.

Like what you hear? Rockman Zero: Resonnant Vie soundtrack is available now! Admittedly, it's a bit tricky to import at the moment, but a quick YouTube search can yield some surprising results...

Thanks for the tip, Robert.
Posted by Protodude at 2:34 PM