Attending Comic-Con this summer? Then you might want to hop on over to Bandai's both for a one-of-a-kind figure. Lo and behold, metallic D-Arts Mega Man X! 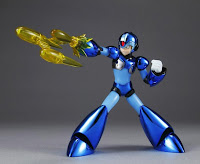 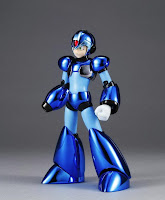 Straight from Bandai's own Adam Newman:

Not only is this a U.S exclusive release for Comic-Con, but a historical first for Bandai Japan's premium label Tamashii Nations. Usually it’s the other way around -- Bandai has Japanese Tamashii Web exclusives that fans overseas are not able to get. A gracious gesture on behalf of Bandai, to say the least.

The San Diego Comic-Con kicks off July 21st. These are going to go fast, so make haste and get to Bandai's booth ASAP!

Thanks for the heads up, Adam.
Posted by Protodude at 9:31 PM