Capcom has announced Mega Man Legacy Collection for PlayStation 4, Xbox One, PC and Nintendo 3DS. Developed by Digital Eclipse, the bundle features all six 8-bit NES entries with new modes and extras. Hit the jump below for the full story! 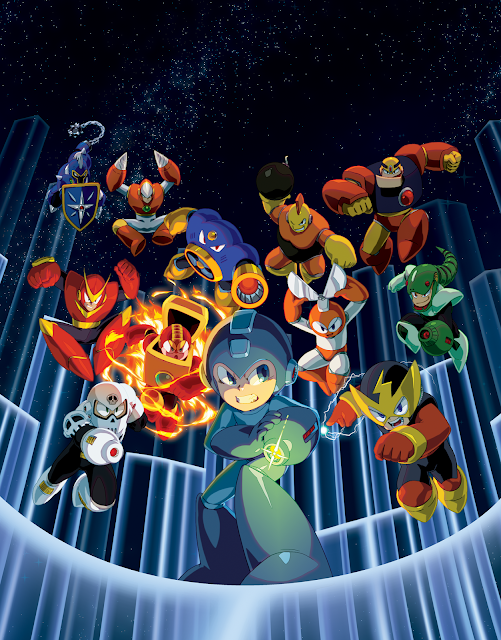 "Mega Man Legacy Collection is a celebration of the 8-bit history of Capcom’s iconic Blue Bomber. Featuring faithful reproductions of the series’ origins with the original six Mega Man games, the Legacy Collection will remind long-time fans and introduce newcomers to what made Mega Man such a popular and iconic character. Mega Man Legacy Collection will feature all six games and more for an MSRP of €14.99 / £11.99 this Summer as a digital download on PlayStation 4, Xbox One and PC, and this Winter on Nintendo 3DS.In addition to the six Mega Man games, Mega Man Legacy Collection features new ways to experience the classic games with the Museum Mode and new Challenge Mode. Challenge Mode remixes gameplay segments from all six games, with plenty of scaling difficulty objectives for experienced players to conquer yet serving as a good starting point for new players, too. Museum Mode contains a comprehensive collection of history, high-res art and original concept pieces – a mega treat for any fan of Mega Man and video game history."


This is a Capcom USA-led project developed by Digital Eclipse. The company aims to convert the original NES games to their proprietary Eclipse Engine. This engine future-proofs classic games by putting all of the porting needs on the engine itself, not the individual games. The Eclipse Engine can run anywhere; wherever it goes, classic games follow. You can read more about it at the link above but in short, they want to do what Criterion did for films with games.

Legacy Collection will be sold digitally this Summer in North America and Europe. The 3DS version is on track for Winter. There are no current plans for a Wii U or PlayStation Vita port. Pending comment from Capcom or Digital Eclipse, these omissions are subject to speculation.

UPDATE: The project's producer, Frank Cifaldi, confirmed additional details on his Twitter. You will be able to choose between 16:9 (stretched, not redrawn) and 4:3 display and have access to fully customizable controls.

Meanwhile, over at US Gamer, Capcom USA staffers Brett Elston and Greg Moore confirmed "the original programming and software tics of the original games, including the Elec Beam pause trick in MM1 and MM3's super-jump controller "hack," have been carried over faithfully."

The game will be live streamed at E3 followed by a playable demo at the San Diego Comic-Con.

More news as it comes.
Posted by Protodude at 10:57 AM