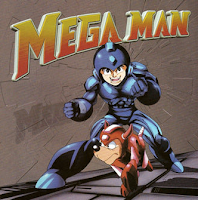 Music is an intricate component to the Mega Man franchise. The convergence of different sounds and instruments has produced some of the most memorable soundtracks in gaming history.

Ruby-Spear certainly took that to heart when setting out to adapt the series for animation; their efforts culminating in a generally interesting musical score (with a rad theme song to boot). Unfortunately, the score never quite got the album treatment it deserved.

Destructoid's Tony Ponce takes us on a trip back to the 90's to explore the insanely offbeat Mega Man cartoon albums that, essentially, have very little in common with the show. The soundtracks, both released in 1996, were a dumping ground of Mega Man-inspired thrash songs, tasteless hip-hop, and amateur metal bands. Today, the soundtracks are a great commentary on record labels trying to cash in on a popular name.

Posted on the Offbeat Hall of Fame you'll find a detailed analysis on both disks, along with (gulp) samples. The contents are just so bizarre, trippy even, that I'm almost certain Capcom/Ruby-Spears regrets ever licensing it.

Those brave enough to learn more can head on down to the Offbeat Hall of Fame.
Posted by Protodude at 12:07 AM