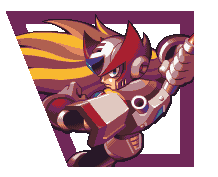 Mobile phony savvy fans won't have to wait too long to play as Zero in Rockman X4 mobile. According to our friend overseas, CapKobun, Zero version will blast its way onto the Capcom Party service on January 5th, 2012.

For those not in the know, Capcom will be porting Rockman X4 to mobile phones, splitting the game in two parts. Rockman X's storyline (X Version) debuted earlier today, which also comes with an all-new network based ranking mode.

X4 mobile is being being touted as Capcom's highest quality cellphone game yet, with authentic gameplay and sound. I've little doubt the sound will be top-notch, but gameplay? I dunno. Those screenshots have me wincing. I think "Rockman X4: Claustrophobic Version" is a more suitable name for this particular product.

But hey, who knows. Maybe this will turn out to be a solid on-the-go port. If all goes well, Rockman X5 mobile is pretty much a done deal.. Not sure if the whole splitting the game in two will work there...
Posted by Protodude at 4:04 PM