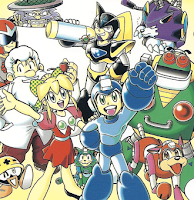 When it comes to translated Rockman manga, there's no better friend than UDON Entertainment. Thanks to UDON, English speaking fans worldwide have be been able to enjoy a bevy of comics from Hitoshi Ariga's Megamix series, to Shin Ogino's Mega Man ZX adaptation.

But in spite of their consistent track record, UDON has yet to revisit twenty-something years worth of untranslated material. Shigeto Ikehara, Yoshinori Iwamoto, and Koji Izuki's works, to name a few. There's an entire backlog waiting to be translated -- so much so it could take years to cover it all! Fortunately, that's where the fans come in.

Manga translation group Rockman Tanjou are gearing up to help lighten UDON's load a bit -- taking it upon themselves to translate Koji Izuki's Rockman & Forte manga. The prologue and first chapter have been officially uploaded for everyone's viewing pleasure, available to download at Tanjou's official blog. The translation sticks closely to the source material, retaining the original Japanese names and vulgarity. Other chapters will be released in due course.

Over-the-top action interspersed with wacky shenanigans make Izuki's Rockman & Forte a non-stop thrill ride. Any classic series fan will dig this stuff, and for fans of Hitoshi Ariga, it's a must read. Click the above and check it out!

Source: The Mega Man Network
Posted by Protodude at 12:57 AM