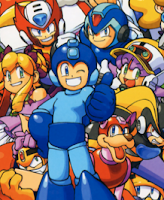 Over at Game Informer, a new interview has been posted with Christian “Sven” Svensson, Capcom's VP of strategic planning and business development. Among topics, he discusses the present status of the Mega Man franchise, which as you no doubt know, has seen better days. His words are a bit reassuring, to say the least:

Game Informer: Mega Man has played an important role in Capcom’s catalogue for many years, but recently he’s been missing in action. Is the mascot’s absence part of a larger plan to refocus at Capcom?

Svensson: Change has been a constant during my six years at Capcom (vastly for the positive) but I want to be crystal clear on this point. Mega Man is a key brand for Capcom and will remain so. I don’t have any products we’ve announced publicly that I can point to and say “see, I told you” but there are “top men” (“top men”? “Yes, top men”) within Capcom thinking about the future of the brand and where it’s going. We will have official announcements in due course.

The only thing we can be certain of is that Capcom is indeed analyzing and evaluating a roadmap for Mega Man. In spite of the many mishaps of 2011, it sounds like they're being proactive right now.

When these announcements will be made remains to be seen. However, something tells me that after the implosion of Universe and Legends 3, Capcom won't be saying anything until things are primed and ready. All we can do now is continue to be patient.