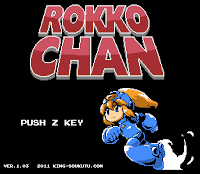 As we bid good riddance to a rather disappointing year, indie developer King dashes onto the scene to end 2011 on a great note. The Japanese team has delivered an authentic and ridiculously enchanting Mega Man parody called Rokko Chan, a free to play Flash game.

Rokko Chan is a parody in every sense of the word. Players take on the role of the titular Rokko, a female robot created by Dr. Sane, who ventures forth to put a stop to the evil ambitions of Dr. Mad. You'll do battle with six robot villains, each with a -man motif, charge through gaping corridors, hop across vanishing platforms, and catch yourself from a spikey doom by the skin of your teeth. Rokko Chan is the hardcore Mega Man game you've been craving all year long.

Although 8-bit styled in presentation, Rokko Chan successfully integrates classic and a smidgen of X gameplay into a polished package. The game even pools mechanics from other classic platformers, like Super Castlevania IV's famous rotating room. There's a boatload of other unexpected surprises, but giving them away would dishonor the experience.

Rokko Chan is nothing short of charming. King has successfully produced a platformer that rivals the official games. It's essentially Mega Man 11 in spirit. There's a lot more to be said, but really, it's better if you give the game a spin yourself. Click here to play it now!

UPDATE: Reader Kirak took the liberty of ripping and compiling the game's soundtrack in its entirety. Download it here! Enjoy!
Posted by Protodude at 1:14 PM