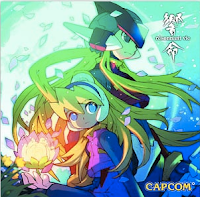 Ippo Yamada was expected to unveil his latest soundtrack this week, and it looks like E-Capcom has let the cat out of the bag: Rockman Zero -resonnant vie-

Resonnant vie will release nationwide in Japan on April 21st (April 30 for E-Capcom) for 2,000 Yen or roughly $24.48 USD. The album contains a grand total of 13 acoustic arrangements of a variety of Rockman Zero songs, a concept reflected in the very term “resonant vie", which is said to use organic, non-electronic instruments to express the outlook of machine based lifeforms.

In first, Ippo Yamada will be standing in as producer while Luna Umegaki will be responsible for arranging the music. Further, it is said the album will include a special jacket illustrated by series artist Toru Nakayama, and a 12 page full color booklet featuring commentary and notes from Yamada and Umegaki.

Keep an eye out on Inti Creates for the inevitable track samples!

Credit: The Mega Man Network
Posted by Protodude at 12:19 PM