Captivate 2011 Kicks Off Next Week 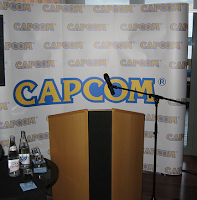 Once every Spring, Capcom USA holds their annual pre-E3 press event: Captivate. The show, exclusive to members of the gaming press and select Capcom Unity members, is home to new game reveals and updates on currently in-development projects. Come next week, that time will be upon us once more.

According to a post by jgonzo, Captivate 2011 will begin some time next week in Miami. While we don't know for sure just what titles will be shown off, the least we can hope for is some mention of Mega Man Universe and perhaps even Legends 3. Of course, there's always the possibility of something new surfacing, too, but I'm not counting on it.

The exact date of when Captivate will take place is unknown, but there's been some whispers of April 4. Also, don't count on news from the event to hit next week; there's usually a NDA set in place that prevents news from trickling out until the following week.

Hopefully, the Unity crew will drop a few hints as to what we can expect from the show. I'm holding out for an MMU update, myself. If not then, perhaps at E3!
Posted by Protodude at 1:58 PM