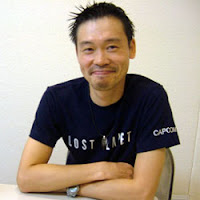 The decision on whether or not to cover the recent happenings of Keiji Inafune has been an on/off battle. One one hand, it'd be nice to keep tabs on the fellow who heavily influenced the Mega Man franchise, making it what it is today. On the other, since he's no longer associated with Capcom (and subsequently Mega Man), there's really not too much of a point. However, this news bite in particular may yet have to do with a certain Blue Bomber... maybe.

According to a listing at BK1, the former Capcom executive is writing a book, tentatively titled "Keiji Inafune Concept." Other than a suggested April release date, no other details are known at this time, however, the book's subtitle, "concept", bears a passing resemblance to the name of Inafune's new business, "Comcept."

Back in December, Inafune reportedly distributed a Comcept business card to an industry analyst -- the event taking place just a short while after the Comcept title first reared its head on Infanune's Inafking blog. It would seem this book, whatever it may be, relates to that of his new company.

So, what does this have to do with Mega Man? If it's an autobiography about Inafune's life in the gaming biz, chances are the book is bound to cover much of his escapades with the franchise. After all, he's pretty much had his hands all over it for some twenty-three years, making up a large portion of his career as a game designer.

If not a biography but more of an informal guide to game design -- a book housing his design philosophies, then perhaps he'll sneak in some Mega Man allusions in there. All speculations, of course.

Hopefully, we can expect an official comment in the near future. Depending on how things play out, I might continue to follow this. If not, I'd advise you to look elsewhere for future updates.